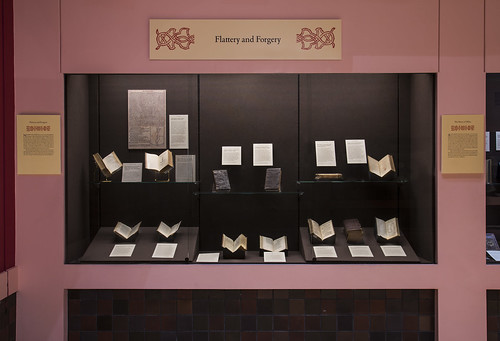 Counterfeits and piracies of Aldus’s publications appeared with great regularity in the early years of the 16th century, prompting Aldus to issue this broadside proclamation, preserved in a unique copy in the Bibliothèque nationale de France. Aldus complains that “it happens that in the city of Lyon our books appeared under my name, but full of errors … and deceived unwary buyers due to the similarity of typography and format (enchiridii forma) …. Furthermore, the paper is of poor quality and has a heavy odor, and the typography, if you examine it closely, exudes a sort of (as I would phrase it) ‘Frenchiness’.”

The document proceeds to list specific typographical errors that readers can rely on to distinguish the counterfeits from the genuine Aldine imprints. The Lyonese printers, no doubt grateful to Aldus for pointing out their imperfections, promptly made the necessary corrections and continued to pirate Aldine editions.

A Warning from Aldus

One of the first Aldine warnings against counterfeiters and pirates is found at the end of this edition of the Silver Age Latin poetry of Statius (ca. 45–ca. 96 CE). Below the colophon Aldus gives notice that “no one is allowed to print this without penalty: warning.” From the collection of Sir Thomas Phillipps.

As a model of elegant Latin, Cicero was the classical author most frequently printed by Aldus and his heirs, and his letters were of particular interest to humanists of Aldus’s day. Note the papal privilege on the lower portion of the title page, threatening with excommunication anyone who reprints this book. Aldus obtained printing privileges from Pope Alexander VI in 1502 and his successor Pope Julius II in 1513, and the texts of those privileges are printed in full at the end of this volume. From the libraries of André-Claude Paru de Mello (1726–1799), Baron Achille Seillière (1813–1873), George Dunn (1864–1912), and William Smith Watt (1913–2002).

The volumes in Aldus’s Portable Library, featuring uncommented text, octavo format, and italic typeface, were an instant success. Printers outside the control of Venice and Papal Rome recognized their commercial potential, and began a lucrative program of imitation. The replica typefont, with a noticeable Gothicizing angularity in the shoulders of the type sorts, and showing uneven presswork, was the first of two created for a small coterie of Lyon printers. This first piracy, copying the Aldine edition of August 1501, reflects all the errors, typographic and linguistic, including the absence of Greek, that Aldus cited in his Monitum of 16 March 1503. There is no colophon, and the two blank places in the addendum reflect the lack of a greek typefont to supply the words ἑλώρια and μέλος.

From the collection of H. George Fletcher

The Source of the First Piracy

This fourth in the series of the libelli portatiles has the dubious distinction of being the first Aldine pirated by the Lyonese printers. The book is open to Aldus’s colophon and the addendum to the Prologue, which contains the two Greek words, ἑλώρια and μέλος, left blank by the Lyon counterfeiters because they possessed no greek typefont. Stolidly bound in Austrian pigskin over boards, tooled in blind in imitation of a delicately intricate French panel-and-border design, this copy was presented on 8 September 1593 to a young Styrian patrician, Daniel Strasser, by an anonymous friend.

A Signed and Contemporary Cambridge Binding

This Lyonese imprint is not strictly a counterfeit, but a piracy of the translation by Theodorus Gaza printed in the Aldine folio edition of 1504, though it also mimics the Aldine octavo format and typography. Bound in contemporary calf by the Cambridge binder Nicholas Spierinck (ca. 1470–1545/6), incorporating his monogram (ns) in the tooling, and with his customary use of scrap manuscript material in the binding.

A Testament to the Global Book Trade

Another Cambridge binding by Nicholas Spierinck on a piracy of Aldus’s 1504 Aristotle, this copy using printed as well as manuscript binding material. The board laminate is composed of leaves from the Mammotrectus super Bibliam printed in Strassburg in ca. 1478. As a French piracy of an Italian book bound in England with German printed waste paper, this volume stands as evidence of the breadth of the book trade in the early 16th century. With an early ownership note of Henry Joliffe (ca. 1505–1573), a student at Cambridge from 1522 through 1538, and the last Marian Dean of Bristol.

A Counterfeit Printed on Vellum

This counterfeit Virgil contains some of the errors identified in the Monitum of 1503, but lacks the colophon with the name of Aldus, as well as the five-line encomium to the type designer Francesco Griffo that should appear just beneath Aldus’s brief preface on the verso of the title page. (Compare this page to the genuine imprint in the Libelli Portatiles cases.) It was, therefore, likely printed after the publication of the Monitum, giving the printers the opportunity to correct some errors while leaving others that allowed them plausible deniability if charged with counterfeiting. The existence of Aldine counterfeits printed on vellum speaks to the market for special copies of books in the early 16th century.

From the Junius Spencer Morgan Collection of Virgil at Princeton University.

In the Monitum of March 1503, Aldus warned that the genuine edition of his Lucan contained an introductory dedication to Marco Antonio Mauroceno, whereas the counterfeit did not. This copy, assuredly a counterfeit due to various typographical and setting differences, includes the dedication letter, and therefore must have been printed after the publication of the Monitum alerted the French printers to their oversight. Bound in green goatskin by Bauzonnet-Trautz for Paul Renouard, Parisian publisher and brother of the great Aldine bibliographer Antoine-Augustin Renouard.

This pseudo-Aldine―the first Aldine Press edition would appear in July 1523―masquerades as an Aldine octavo in content, format, and typography. A striking feature of this copy is its physical state: forwarded (i.e., collated, sewn, and bound into pasteboard boards) but not finished (i.e., covered in leather or fabric). The book block has been sewn on three double-cord supports (a classic Italian indicator for small-format books), and all edges are tinted dark blue, a telltale Italian feature for medium-luxury books. So this book, printed and assembled in Lyon, was intended for shipment “back” into the Italian market, where it would be covered in a regional style, for local consumption.

The Lyonese printers often covered their tracks by omitting the place, date, and printer’s name from their publications, while relying on the recognizable italic typography and portable format to echo the familiarity of the genuine Aldine imprint. Although this collection of the works of Giovanni Gioviano Pontano “borrows” Aldine typography and format, it does not claim to be a genuine Aldine. Indeed, the colophon explicitly records the place of imprint as Lugdunum (the Latin name for Lyon), and records “Bartholomei Troth” as the publisher. Although listed by Renouard as an Aldine piracy, the lily on the title page evokes the Florentine press of the Giunti family.

Piracy of Aldus’s innovations continued well after his death in 1515. Although Aldus never printed the works of this late 4th-century CE military tactician, the typography and format are clearly intended to evoke an Aldine publication. Of particular interest is the way in which the printer uses typography to depict battle lines. Bound in contemporary Roman goatskin with the author’s name “F. Vegetius” stamped in blind on the upper cover, and the (owner’s?) name “C. Aquilii” on the lower.

This edition of Pliny’s Natural History is not actually a piracy of an Aldine imprint, but nevertheless employs a counterfeit reproduction of Aldus’s italic type and octavo format. Aldus obtained a ten-year privilege from the Venetian Senate for his italic types in 1501, but that protection did not extend beyond the Venetian Republic. Bound in contemporary Italian blind-stamped calf, which might imply that the book was ultimately intended for the Italian market.

A Florentine counterfeit of the works of Ovid, including The Art of Love and The Cure for Love. The device is a crude imitation of the Aldine dolphin and anchor, with a mean little dolphin wound the wrong way around the anchor. The initials in pen on the device stand for A[ldus] M[anutius] R[omanus], either an effort to support the pretense, or evidence that the counterfeit must have convinced someone.

← Libelli Portatiles
The Heirs of Aldus →
Flattery and Forgery