Taming the Tongue in the Heyday of English Grammar (1711-1851): From the Collection of Bryan A. Garner 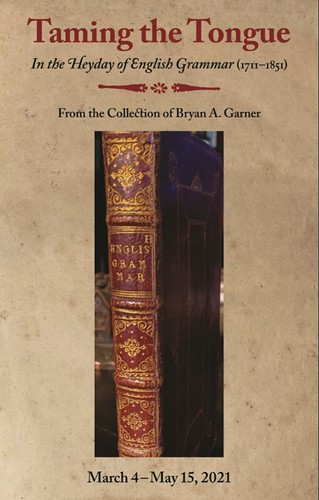 In September 1974, when I was a sophomore in high school, a teacher asked me to name the parts of speech. It was in a small college town in the Texas Panhandle, during the first meeting of a class called “English Grammar.” I hesitated on a couple of the answers, but here’s what I said: “Noun, verb, adjective, adverb, pronoun, preposition, conjunction, article, and interjection.” My classmates were impressed, it seemed, that I could remember this information we’d gained three years before.

Despite various attempts in the next few minutes, nobody could figure out where I’d gone wrong.

“You named nine parts of speech, Bryan. There are only eight. Articles aren’t among them. Articles count as adjectives.” I didn’t receive so much as a “Good try, though.”

That piqued my curiosity, so I decided to look further into the question. I went to the college library and consulted all the English grammars I could find. The answer to this simple question—the parts of speech—had wildly varying answers from different grammarians, ranging from 2 to 33. Given my newfound familiarity with grammars, I started acquiring them wherever I could find them in bookshops and library sales.

I’d become a collector—and a writer.

At first I wrote about Shakespeare’s language, then legal language, then the English language generally. In my late 50s, I circled back to write about English grammar and its colorful history.

Meanwhile, from 1988 through 2019, I set foot in about 300 bookshops a year. My work took me to all the major (and many minor) cities across North America, week by week—and sometimes to other continents as well. Over time, certain shops became favorites, and I’d return every chance I got—especially to those in Chicago, Columbus (Ohio), Denver, Detroit, Long Beach, Milwaukee, Minneapolis, Morristown (N.J.), Phoenix, Rockville (Md.), Saint Paul, Salt Lake City, San Diego, St. Louis, Tampa, and Wichita. I knew the owners, and they at least recognized the man who was oddly drawn to their reference and law sections.

My main interests are law, English dictionaries, English grammars, and linguistics. Rarely would booksellers be proud of those sections in their shops, and they’d be even less proud after I left the sections much smaller.

My fellow Grolierites are unfailingly patient with me when I warm to discussing English grammars. For that I’m grateful.

As off-putting as our memories may be about learning grammar, the stories of the grammarians themselves—their personal struggles, their rivalries, their enmities, their failings, their successes—have a universal appeal. Their stories are our stories, as if in a parallel universe.

Whatever you take away from this exhibition, I hope you’ll find some lessons and truths about humanity. I’ve tried to recover as much of the human story as I could from the dustiest, most neglected sections of my beloved bookshops, many of which, alas, no longer exist.