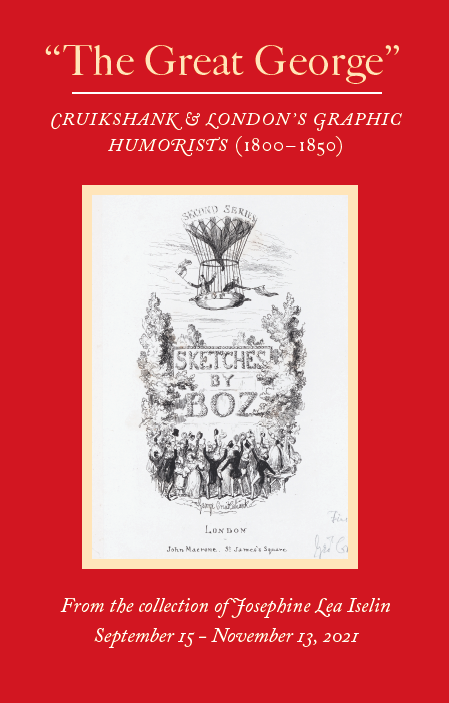 I collect 19th- and 20th-century caricature, focusing on London and Paris in the first half of the 19th century. My previous exhibition exploring French caricature during the reign of Louis Philippe (1830–1848), centered on Charles Philipon, the publisher who launched the great French satirical journals of the July Monarchy and the careers of the greatest French comic artists of the time, Honoré Daumier, J.-J. Grandville, Cham, and young Gustave Doré. The protagonist of this exhibition is George Cruikshank (1792–1878), arguably the greatest British graphic humorist of the first three decades of the 19th century, whose working life spanned over 70 years and the reigns of the four monarchs who ruled Great Britain during the 19th century.

This exhibit covers only the first half of Cruikshank’s life (1792-1850), during which time English society underwent a sea change from an 18th century aristocracy, dominated by an aging and sick George III and a profligate Regent (George IV), that was engaged in a costly war with France, to the early Victorian era with its growing middle class, struggle for representative government and reform, increased literacy, industrialization, and the shift from an essentially agrarian to an urban society.

Cruikshank was schooled by the great humorists and engravers of the Regency. Once that generation faded, at age 19, he became the dominant figure in the artistry of English humor for over two decades. From roughly 1811 to 1836, whether by his colorful copper etchings of little Boney and the Prince Regent, or later through the books and pamphlets published primarily for his witty and endearing images, “the Great George” was a rock star, hailed by critics and sought after by publishers. By the late 1840s, however, with the great success of Mr. Dickens, the arrival of Punch, and the introduction of mass printing of images, Cruikshank was eclipsed by a new generation of artists. The author, not the illustrator, became the principal moving force in the book world. And by the early 1850s, having lost his first wife and married a second, he had become an ardent supporter of the temperance movement, longing to be a respected artist of middle class society. While he remained highly productive for the next 20 years, the whimsical quality of Cruikshank’s images diminished, and the 18th century skills of his fine etchings were of little import in the world of Victorian publishing.