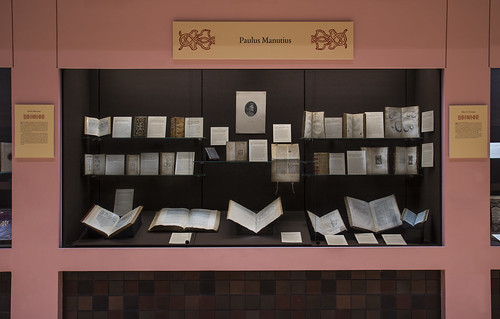 A Sourcebook for Renaissance Art

Emblematum Libellus. Venice: The Sons of Aldus, after 1 June 1546.

On a very different scale from the Poliphilo shown nearby, this illustrated “little book of emblems” compiled by Andrea Alciati (1492–1550) is the only emblem book printed in Italy in the 16th century. Each page contains an allegorical or mythological representation, accompanied by a few explicatory verses meant to encourage introspection. The woodcuts contained in this book influenced artists throughout the Renaissance and beyond. Shown here is the familiar image of the three Graces, later copied by such artists as Botticelli, Raphael, and Rubens.

When the press re-opened in 1533 under the control of Paulus Manutius, revised editions of earlier titles formed part of the publishing program. This collection of Valerius Maximus’s Memorable Deeds and Sayings, published by Aldus in 1501 and 1514, was intended to supply historical anecdotes for aspiring writers and speakers. Bound in an entrelac (strapwork) style binding, and previously owned by Richard Heber (1773–1833), one of the founders of the Roxburghe Club.

In the Original Clothes

This basic covering of plain thick vellum may have begun life as an interim measure, and its replacement by something more elegant never took place. As a result, we see a typical example of a simple covering that barely protects the volume. Grattius, Nemesianus, and Ovid’s Haleutica are editiones principes. Hunting and fishing constitute the unifying theme of the six poetical works gathered here.

This compilation of alchemical texts by Pietro Bono (fl. 1323–1330) is one of the earliest publications on alchemy, and the only work on the subject printed by the Aldine Press. The Aldine bibliograper Renouard evocatively notes that many copies of this book bear signs of fire damage, implying that the text was actually used in the attempt to turn base metals into gold.

The Aldine edition of this title must not have sold well, as the printer Giordano Ziletti acquired the unsold sheets of the 1546 edition from Paulus Manutius, reset the first gathering to include his own titlepage, and then republished the imprint as his own in 1557. Ziletti’s edition lacks the last two leaves of the original sheets, bearing the dolphin and anchor device and Aldus’s colophon, thereby removing all evidence of an Aldine origin for this book.

The Aldine Press in Paris

Bernardo Torresani, the grandson of Andrea Torresani, printed in Paris “in Aldina bibliotheca” from 1554 through 1569. The details of his relations with the Venetian press of Paulus Manutius are unclear, but this publication of Paulus’s works on the Roman legal system, in the same year that the Venetian press published the text in folio, argues that there was some coordination between the two geographic locations. As shown, Torresani used the familiar dolphin and anchor device of the Aldine Press for his Parisian imprints.

One of the crowning glories of the early Aldine Press was the magnificent Hypnerotomachia Poliphili, shown in the Pressing Business section of this exhibition. Other than a new Italian titlepage and the substitution of Roman initials for woodcut initials, this is a virtual reprint of the 1499 edition.

All but six woodcuts from the original edition reappear here, and the crispness of the impressions after fifty years of disuse is remarkable. The original woodblocks, all but a half-dozen in good condition, had been found in storage at San Stephano in 1544. The decision to reprint the Poliphilo may be a reflection of a growing audience of collectors in the mid-16th century who were already demanding the “greatest hits” of the Aldine Press.

Nothing New Under the Sun

The Heirs of Aldus printed the medical writings of Galen in 1525 and Hippocrates in 1526 (see the previous case), and Paulus Manutius added to the Aldine medical literature in 1547 with this collection of ancient authors on various medical topics. The volume comprises short works by Celsus, Pliny, Apuleius, Aemilius Macer, Priscian, and others, and provides particular insight into how the ancients applied herbal remedies to disease and injury. The leaf displayed discusses the medical uses of cannabis.

A small (twelvemo) imprint from the press of  Bernardo Torresani, the grandson of Andrea, printed in Paris “in Aldina bibliotheca.” Bartolomeo Ricci (1490–1569) was the tutor to Prince Alfonso d’Este of Ferrara (1533–1597), and dedicated this short rhetorical treatise to him. Contemporary French calf, gilt, with interlaced design enclosing a central hexagon that evokes the Star of David.

The Aldine Press in Bologna

Antonius Manutius (1511–1559), an older brother of Paulus Manutius, briefly operated a branch of the Aldine Press in Bologna. Documentary evidence reveals that Antonio left Venice about 1555 to pursue the establishment of a branch of the family business in Bologna. The effort was unsuccessful, as only six titles with an Aldine Bolognese imprint exist, and there is some evidence that even these six titles were actually printed in Venice, but with a Bolognese imprint in an effort to curry favor with the local elites. The Sons of Aldus device is partially a mirror variant of the version used in Venice.

Binders routinely used manuscript and printed waste, both vellum and paper, in their work, thereby unintentionally preserving for posterity works that might otherwise have been lost. On occasion, as seen in this example, the entire binding is a recycled manuscript leaf. This collection of orations given in honor of famous men was printed by Paulus Manutius for the Accademia Veneziana, and bound in a biblical manuscript leaf that contains Genesis 49:1 through 50:4.

Urban Planning in the 16th Century

Pietro di Giacomo Cataneo (ca. 1510–ca. 1574) authored this, the only architectural book printed by the Aldine Press. The four books include over fifty woodcut images, and cover topics such as urban planning, building materials, ecclesiastical architecture, and the design of private residences. Andrea Palladio (1508–1580) cites Cataneo and this Aldine edition as an influence on his own architectural work.

Paulus continued his father’s efforts to propagate classical scholarship, as with this work concerning the accurate representation of the three-dimensional heavens in the two dimensions of a sundial. The original Greek text of the Analemma of Claudius Ptolemy (ca. 90–ca. 168 CE) does not survive, and this edition is based on a Latin manuscript discovered and edited by Federico Commandino (1509–1575). Commandino appended to this edition his own work on the construction of sundials.

During the 1540s and 1550s, Paulus Manutius, a Ciceronian scholar, prepared a number of unusual volumes, composed in octavo but imposed in quarto to create large-paper versions. Many survive in Venetian maroon or black goatskin, the bindings decorated with the Aldine device painted in gold and silver, gilt initials P M on the rear cover indicating their gift by Paulus to a distinguished person, and sometimes displaying the recipient’s heraldic charges. (One of these presentation copies is on display in the case Collecting Aldus.) The present copy is open to show the dramatic impact of this exorbitant use of space. Note the register pinholes (indicated by brass pointers, with a black background placed to highlight the holes), normally trimmed away in conventional format. The pins ensure the accurate alignment of the text blocks on both sides of a leaf during printing.

On Ancient Weights and Measures

In line with the Aldine tradition of publishing contemporary classical scholarship, Paulus Manutius printed this treatise on Roman and Greek measurements of length, weight, and volume by the Italian lawyer Lucas Paetus (1512–1581). This book renewed scholarly interest in the subject, and is adorned with woodcuts, each illustrating an element of classical measurement taken from archaeological expeditions.

Aldus and his successors printed Caesar’s Commentaries on the Gallic War thirteen times between the first edition of 1513 (displayed in the Libelli Portatiles case) and the last of 1588. This edition of 1571, printed by Aldus the Younger while his father Paulus was still operating the Press, is bound in a contemporary pigskin binding. The upper cover bears the image of Fides and Spes (Faith and Hope), and the lower a blindstamped image of King David. The initials “G H R” are likely those of the owner who had the book bound in 1576 in the German fashion.

The Accademia Veneziana was also known as the Accademia della Fama, for the allegorical image of winged fame that appears on each titlepage. (The gilded statue of this motif crowns the Dogana on the Grand Canal.) Fame is shown in the act of flight, with one foot on the earth, trumpet in mouth, bathed in light and wielding a banner that reads “I fly to heaven to rest in God.” This short work discusses the occasions in the Bible in which God speaks in his own voice. Federico Badoer fell out of political favor for unknown reasons and was imprisoned in 1561. The short-lived Accademia Veneziana came to an end with his fall from grace.

Federico Badoer (1519–1593) was a member of an ancient Venetian family, and represented the Most Serene Republic as ambassador to various European courts. In 1557 he founded the Accademia Veneziana, with the goal of preserving and disseminating contemporary human knowledge. Paulus Manutius was hired as printer to the Academy in 1558, and printed close to sixty works under its auspices from 1558 to 1561, including this short treatise on the Order of the Golden Fleece.

The Council of Trent

This is the first edition of the first book issued by Paulus Manutius as the head of the Rome publisher In aedibus Populi Romani, which initially operated under papal auspices. Cardinal Pole (1500–1558), a kinsman of Henry VIII who broke with him over religious matters, served as Queen Mary’s closest advisor and ended his life as chancellor of Oxford and Cambridge. The two works, background treatises for the Council of Trent (1545–1547; 1551–1552; 1562–1563), belong together, though that is now rarely the case. This copy, in contemporary limp vellum, may be one of the 220 copies (out of 1700) reserved for the fathers of the Council.

Much of Paulus’s work in Rome in the 1560s consisted of printing various editions of the proceedings of the Council of Trent, the Roman Catholic Church’s doctrinal response to the Protestant Reformation. This is one of a few known copies certified as accurate by the secretary and two notaries of the Council of Trent, signed by Angelus Massarellus, Bishop of Telese and Secretary to the Council, and the Notaries Marius Antonius Peregrinus and Cynthius Pamphilus.

This octavo edition of the proceedings of the Council of Trent, published in the same year as the preceding folio edition, is printed on blue paper, probably as a presentation copy to one of the participants. The book is replete with marginal notes, occasionally signed “C. A.” A pencilled note on the flyleaf attributes these annotations to Francesco Cardinal Alciati (1522–1580), and it is likely that he was the recipient of this special copy printed on blue paper.

← The Heirs of Aldus
Aldus the Younger →
Paulus Manutius