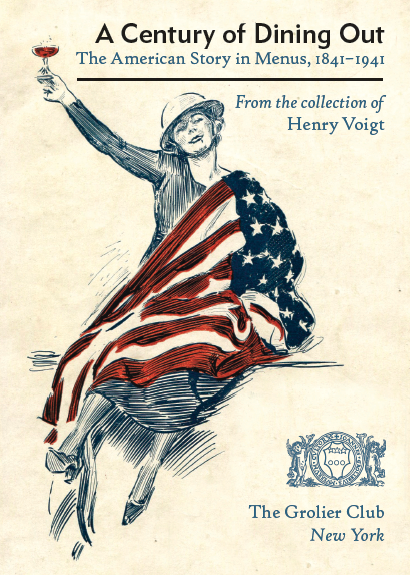 Menus are minor, transient documents that tell us how people have dined outside the home over time. Examine one and be transported back to the everyday life of the past - whether to a lavish banquet in the Gilded Age or a food-relief eatery during the Great Depression. They aid our cultural memory by providing historical evidence, not only of what people were eating, but what else they were doing and with whom they were doing it; and what they valued.

In the United States, menus came into general use in the 1840s when hotels and restaurants began to replace the old inns and taverns that served a limited choice of domestic-style meals. Dining among strangers in quasi-public spaces became a new and novel kind of entertainment in which the menu played a central role, offering diners choice and anticipation for the first time. Menus suddenly appeared in all types of venues and forms of transportation.

Since menus reflect all aspects of society, it was possible to weave a literary thread through the exhibition, including rare examples from a haunt of Edgar Allan Poe, Mark Twain's seventieth birthday party at Delmonico's, and a long-forgotten reception for French zoologist Paul B. Du Chaillu in the New Mexico Territory. The annual dinners of the American Booksellers Association and the Bibliophilic Society recall the social world of book dealers and prominent collectors in New York at the turn of the last century.

The menu is an art form that aims to please. While most were intended for short-term use and not meant to be saved, others were finely crafted by high-society stationers such as Tiffany's and Dempsey & Carroll. Even when kept as personal mementos, however, they were frequently discarded by later generations for whom they had no special meaning. As with other types of ephemera, part of their appeal lies within the notion of their improbable survival.

The COVID-19 pandemic has hit the restaurant industry very hard, rendering our memories of dining out to be even more nostalgic. Though we have had to delay the exhibition originally scheduled to open in the ground floor gallery this September, I offer a preview in the form of more than a hundred items. While nothing beats seeing the real thing, every media has its advantages. May you enjoy the freedom online viewing affords.