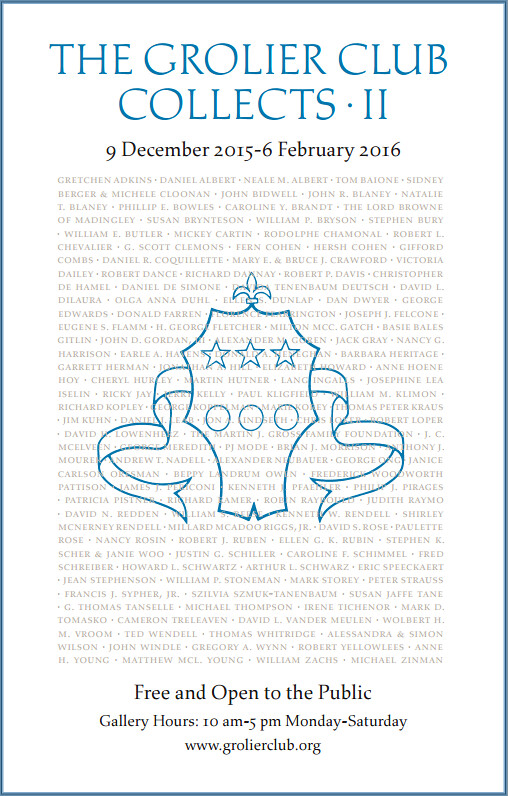 Behind every great collection lies a great story.

That was the premise of the first Grolier Club Collects show in 2002/2003, and a dozen years later it remains the central idea of The Grolier Club Collects II, a gathering of books, manuscripts and works on paper drawn from the international membership of the Grolier Club. Reflecting the breadth and quality of those members’ varied collecting interests, the exhibition encompasses medieval manuscripts and early printed books as well as contemporary literature; rarities ranging from Old Master drawings and prints, to nineteenth- and twentieth-century posters, cartoons and ephemera to livres d’artiste, children’s books, book objects, and photographs. Each object comes with a tale, written by the collector, describing how and when the book, manuscript, or print was acquired, under what circumstances, how it fits (or does NOT fit) into an overall collecting scheme and—most importantly—why it is precious to the collector. These unique objects illuminate the remarkable range of subjects pursued by bibliophiles on an international stage and provide proof that the collecting of books and prints in the age of the internet is not only alive and well, but thriving.

To mark our 132nd season, The Grolier Club Collects II brings together objects from 132 member collections, arranged by theme: History, Theology, Science & Medicine, Voyages & Maps, Association Copies, Bibliography & Book History, Literature, Illustrated & Artist’s Books, Fine Printing & Book Arts, Bindings, Photographs, and Prints, Drawings, & Other Works on Paper. It is a survey of collecting today, as reflected in the interests of current Grolier members. It is not a ‘treasures’ show of jewel-encrusted and gilt-edged rarities, but rather a collection of objects chosen for their power to inspire, including:

- Book artifacts, ranging from an 8th-century Japanese Buddhist scroll, to a manuscript fragment in Greek of the Testamentum Domini (The Last Will and Testament of Jesus), to a modern miniature book (Robin Llywelyn’s Portmeirion).

- Historical works, from a copy of the 1483 Chronicon of Eusebius, to the first book printed in New Jersey (1723), to a copy of Red Channels: The Report of Communist Influence in Radio and Television;

- Works on paper in all forms, from an elaborate hand-made nineteenth-century valentine, to prints by Dali and Ben Shahn, to photographs by Julia Margaret Cameron and Candida Höfer.

Reflecting the interests of the Club’s membership, the variety in these cases is remarkable. They range in age from the third century to the twenty-first century; some are valued in seven figures, and some have no commercial value whatever; many are in English, but others are in Greek, Latin, French, German, Russian and Hebrew; some are pristine, and others are in tatters. Yet they all have something in common. To find it, simply look about you, and share the passionate interest of collectors in objects which they think are beautiful, intellectually stimulating, and personally significant. This passion is what the Grolier Club is all about.