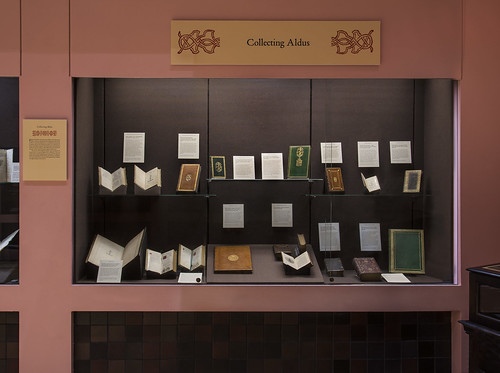 Philip Melanchthon (1497–1560) likely acquired these volumes shortly after publication: he announced his intention to lecture on Homer to students in Wittenberg in 1518, and subsequently donated the set to his friend Martin Luther (1483–1546) in 1519, inscribing them three times in Greek and Latin. They are heavily annotated in more than one humanistic hand, signaling matters of scholarly interest. The notes may be Melanchthon’s for his own use, or those of a student or students taking lecture notes. The books are in contemporary German bindings of pigskin over beveled wooded boards, with brass catches & clasps; each volume is titled in ink horizontally on the fore-edges, so the books were shelved vertically and spine-in.

From the collections of the Rare Book and Manuscript Library, Columbia University.

From the Collection of a Doge of Venice

Marco Foscarini (1696–1763) was the 117th and fourth-last Doge of Venice, 1762–1763, whose reign was cut short by his deteriorating health and death. A wealthy Venetian patrician and member of the Council of Ten, he had collected a large library for decades, including many editions from the Aldine Press. He had his books rebound in contemporary style, stamped in gilt with his arms; this binding of tan calf is typical of the covering materials.

The editio princeps of Herodotus, from the library of Desiderius Erasmus (1466–1536), and signed sum Erasmi on the verso of the final leaf.  The second inscription notes that the volume passed into the hands of Erasmus’s friend, the Belgian scholar Levinus Ammonius (1488–1557) in 1529.  The text is annotated throughout in the hands of Erasmus and Ammonius.

From the collections of the Rare Book and Manuscript Library, Columbia University.

During his initial extended stay in Italy, as Treasurer of French forces in the Duchy of Milan from 1509 to 1512, Jean Grolier assembled his first library. This collection included upwards of a dozen Aldine octavos. Some of that first library was part of the ransom that freed him from prisoner-of-war captivity, and the survivors are widely scattered. Grolier had the books bound in Milan, but all but four of the octavos were rebound for bibliophiles in England and on the Continent during the 19th century, replacing seriously deteriorated original bindings. This set contains Grolier’s early arms with the “Aeque difficulter” device, and is illuminated throughout in gold and colors. The present books are in English bindings of green goatskin gilt in an elaborate border-and-centerpiece design with Greek-key turn-ins, probably attributable to Charles Lewis or, less likely, Dawson & Lewis.

This is the second Aldine edition of the first treatise on Italian grammar, authored by Francesco Fortunio (ca. 1470–1517). The volume was bound by Ridge & Storr of Grantham in green goatskin for Sir John Hayford Thorold (1773–1831) of Syston Park, with the iconic Aldine device stamped in gilt on both covers, as usual for Syston Park bindings. With the later bookplate of Henry William Poor (1844–1915), a Wall Street stockbroker whose family firm eventually became Standard & Poor’s.

The Lovers of Asolo is a dialogue on the nature of platonic love, and offers a model of elegant Italian composition as well as a window into the mores of Italian Renaissance high society.  This copy retains the dedication from the author Pietro Bembo (1470–1547) to his lover Lucrezia Borgia (1480–1519), the daughter of Pope Alexander VI and wife of Alfonso d’Este. When Alfonso fell out of favor with Pope Julius II, Aldus suppressed this dedication, which is therefore lacking in most copies. Bound in early 19th-century straight-grained green goatskin with the monogram and arms of Sir Mark Masterman Sykes (1771–1823). Later owned by Sir John Hayford Thorold of Syston Park (1773–1831) and Archibald, Earl of Roseberry (1847–1929).

This copy of Cataneo’s four books on architecture was owned by and bound for Charles-Henry Comte d’Hoym (1694–1736). Comte d’Hoym employed a number of binders during his career as a collector, but this simple binding, featuring his gilt arms on French calf covers, was likely executed by Jacques Girou in the 1730s. The Grolier Club printed a biography of Comte d’Hoym in 1899, and the manuscript catalogue of his library is held by The Grolier Club.

Bound in Venetian brown goatskin by the Fugger Binder for Antoine Perrenot de Granvelle, Bishop of Arras (1517–1586), with the title of the work stamped in gilt across all three covers and his arms stamped on the verso of all three titlepages. Similar to the edition of Cicero’s orations owned by Cardinal Accolti, this set has a manuscript title contained within a purple cartouche across the fore-edge of all three volumes. Subsequently owned by Edward Herbert, 2nd Earl of Powis (1785–1848).

The first Aldine edition of most of the Neo-Latin poetry of the humanist Giovanni Aurelio Augurello (1456–1524), professor of Greek in Venice. In addition to his scholarly pursuits, Augurello was a passionate alchemist, a theme which recurs throughout his poetry. Bound for Marcus Fugger (1529–1597), the eldest son of Anton Fugger, with his initials on the front pastedown.

This collection of the letters of illustrious men was printed by Bernardo Torresani, the grandson of Andrea Torresani, in Paris in 1556. In the same year, Paulus Manutius printed an octavo edition of the text in Venice, indicating that there must have been some coordination between the two efforts. Bound for Renouard, signed and dated (1794) in his hand and with his catalogue number “2401” below. Subsequently owned by Edward Vernon Utterson (1777–1856), a founder of the Roxburghe Club. This copy (lot 592) sold for ten shillings in the 1852 sale of his library.

This Latin version of the famous story of Jason and the Argonauts was owned by the renowned Aldine bibliographer Antoine-Augustin Renouard (1765–1853), and bound for him by the French binder Pierre-Joseph Bisiaux. Renouard’s name is stamped in gilt on the lower turn-in of the upper cover, and the binding includes the pink doublures and vellum endleaves that are characteristic of Renouard’s bindings.

The first Aldine edition of the Latin poetry of Tito Vespasiano Strozzi (1422–1505) and his son Ercole Strozzi (1471–1508), dedicated by Aldus to the notorious Lucrezia Borgia. Bound in contemporary black goatskin, with the authors’ name “Strozii”, the initials “N. G. H.” and the Aldine dolphin and anchor device stamped on the upper cover. This is perhaps the earliest example of a collector distinguishing his Aldines through a binding. The incorporation of the Aldine device into a binding would recur repeatedly throughout subsequent centuries, most visibly in the Syston Park bindings shown elsewhere in this case.

This first of three volumes of Cicero’s orations printed by Paulus Manutius in 1540 is dedicated to Cardinal Benedetto Accolti (1497–1549), and this particular volume is the presentation copy, bound by the Mendoza Binder in Venetian red goatskin, with Cardinal Accolti’s arms on the upper cover and the Aldine dolphin and anchor on the lower. Note the absence of a title on the spine: the fore-edge of the book bears the title within a painted purple cartouche, evidence that the book was originally shelved with the spine facing inward.

A Guidebook to Ancient Greece

The editio princeps of Pausanias’s description of Greece is a valuable resource for the history, nature and archaeological sites of the area as related by a second century CE eyewitness. The preface explains that the running titles provide the reader with a quick reference to the content of each page. Aldus had planned to issue an edition of Pausanias as early as 1497, and in 1502 thanked Johannes Calpurnius for the loan of the manuscript on which this edition is based. Bound in 18th-century green goatskin by Nicolas-Denis Derôme (dit le Jeune). Previously owned by Sir Thomas Phillipps (1792–1872) and John Hely-Hutchinson (1881–1956).

← Aldus the Younger
The Dolphin and Anchor →
Collecting Aldus