The Bibliography of the Aldine Press 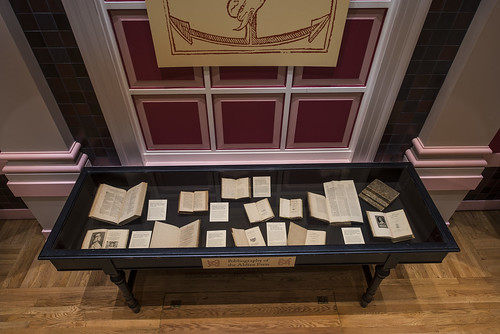 This is the second volume of Gesner’s (1516–1565) Bibliotheca Universalis, and serves as the subject index to the complete work. The book is dedicated to contemporary printers, and includes lists of their publications. Book XI is dedicated to Paulus Manutius. Gesner states that his source for the list of publications is a three-leaf folio catalogue, which corresponds to the catalogue published by the Aldine Press on 24 November 1513, the last to be issued during Aldus’s lifetime.

From the collection of Roland Folter.

The Savior of Greek and Latin Letters

Born the son of a printer, the Florentine Domenico Maria Manni (1690–1788) wrote a number of biographies of Italian printers, including this on Aldus Manutius, “the Venetian savior of Greek and Latin letters.” The biography is followed by a shortlist of publications of Aldus the Elder. The frontispiece bears an engraving of Aldus by Antonio Baratti (1724–1787).

The Life of Aldus

This is the first published biography of Aldus Manutius. As with the work by Domenico Manni displayed nearby, this biography, written by Christian Gottlieb Unger (1671–1719) and published many years after his own death, includes a shortlist of titles printed by Aldus. The list is far from comprehensive and includes no bibliographical details.

The sale catalogue of the famous library of Georg Wilhelm, Freiherr von Hohendorf (ca. 1670–1720) is the first to segregate Aldine imprints into a category of their own. The auction never actually took place, as the collection was purchased en bloc by the Vienna Hofbibliothek, where it still resides in the successor institution, the Ӧsterreichische Nationalbibliothek.

Jean-Baptiste-François Née de la Rochelle (1751–1838) was a bookcollector and bookseller, and the author of a number of bibliographical works. This collection of research on and descriptions of Aldine imprints extends throughout the lifetime of the three Manutii, and likely provided source material for the printed bibliographies that follow in this case.

The first edition of these bibliographies, printed in Pisa in 1790, was based on the Aldine collection of Cardinal Lomenie de Brienne (a collection later acquired by Renouard). The preface kindly asks readers for corrections, particularly as they relate to items that are included incorrectly as Aldine imprints, or are overlooked and should be added. Such notices are to be sent to Abbot Antonio Cesare Burgassi, who, for this reason, is assumed to be the author or compiler of this work.  Subsequent editions incorporate many such improvements.

These small volumes mark a notable improvement over the earlier efforts of Domenico Maria Manni and Christian Unger. The lists are increasingly complete as new imprints are discovered, and the descriptions include formats as well as pagination or leaf counts.

Renouard built on the work of his predecessors, while using his own collection and those of correspondents to write this definitive edition of the bibliography of the Aldine Press. The work was first published in 1803 in two volumes (with a supplement printed in 1812), the three together shown here in contemporary paper wrappers.

A second edition was published in 1825, shown here in a large-paper copy with a facsimile of the trial sheet of the polyglot Bible unfolded. Renouard’s bibliography is invaluable for added material such as this.

The third edition of 1834,with the engraving of Aldus on the frontispiece, remains the definitive bibliography of the Aldine Press to this day.

From the collections of G. Scott Clemons and H. George Fletcher.

← The Dolphin and Anchor
Portraits →
The Bibliography of the Aldine Press