The Heirs of Aldus 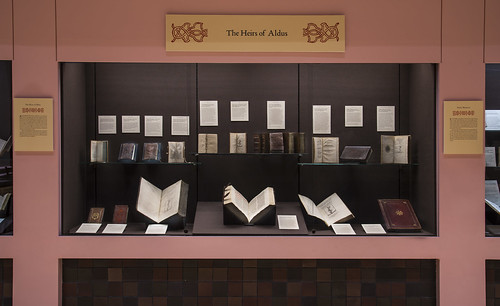 The Death of Aldus

Aldus died on 6 February 1515, and his death was announced to the world in the preface to this edition of Lactantius. Giovanni Battista Egnatio (1478–1553), a frequent editor of Aldine editions and the executor of Aldus’s estate, opens his dedication with the phrase “We have recently suffered a grave wound …”

This third Aldine edition of Horace, following the 1501 and 1509 imprints, was thoroughly revised by the editor Andrea Navagero, and is the most accurate of the various Aldine editions. Bound in contemporary Italian goatskin, incorporating into the binding a Latin manuscript written in a minuscule humanist hand.

The first Aldine edition of Martial appeared as part of the series of libelli portatiles in 1501, and appears here in a second edition, published by Aldus’s heirs. Martial, a Spaniard writing in Rome in the first century CE, provides an intimate and satirical view of the daily life of a Roman citizen, and his witty observations pioneered the epigram as a literary form. Bound in contemporary blind-stamped calf, retaining the green silk ties that would have been used to hold the book closed.

In addition to following through on planned publications left undone at the death of Aldus, his heirs reprinted some of the more popular titles from the earlier years, including this octavo reprint of one of the first imprints of the Aldine Press (see the original printing in the first case of this exhibition). Yet even in this reprint the scholarly contribtion continues, as it includes the editio princeps of the short poem De Lapidibus.

On the Wines of Bordeaux

The sole Aldine edition of the poet and politician Ausonius (309 – ca. 395 CE), a governor of Gaul and Consul of Rome in 379 CE. His Ephemeris provides important insight into the daily life of an average Roman citizen, and the Mosella describes the landscape, homes, people, and wines of the towns along the Moselle river. An early calf binding with unidentified arms, incorporating a ram’s head, scallops, the word “aliqū” and the Roman numeral XVI.

The Only Roman Novel

This first Aldine edition of the works of Apuleius includes his Golden Ass, the only Roman novel to survive into the modern era. In addition to this and various other platonic works of Apuleius, the text includes the editio princeps of the neoplatonic works of Alcinous, and is therefore an important contributor to the Hermetic tradition. Bound in contemporary Venetian goatskin, with the figure of Fortune riding a dolphin and holding a sail blind-stamped on both covers.

Aldus Manutius printed Plutarch’s Moralia in 1509, but this 1519 edition is the first Aldine edition to include the Greek text of his Parallel Lives of Famous Greeks and Romans. In his prefatory dedication to Pietro Bembo, Gian Francesco Torresani observes that “just as farmers produce fruit, so it is only right that booksellers produce books.” Bound in contemporary Venetian goatskin.

This book is technically not bound, but instead covered in contemporary, heavy, plain cream-white paper over very thin pasteboards, and sewn on three supports in the Italian manner. Many Aldines will have been protected in this simple guise in their earliest days.  They will have left the shop either as gathered signatures or in a simple wrapper to keep the book block neatly together until the owner took the copy to a local bookbinder. This modest work by Sannazaro is historically significant as the final octavo of the entire era of the Press from the April 1501 inauguration of the revolutionary Portable Library past the death of Andrea Torresani in October 1528 to the closing of the Press in 1529 for some four years.

The only Aldine edition of the ten tragedies of Seneca the Younger, including the Octavia, wrongly attributed to him. The editor Girolamo Avanzi, about whom very little is known, claims in the preface to have corrected “three thousand errors” from previous printings. Seneca’s tragedies exerted a heavy influence on the Elizabethan theater in particular. This is the first issue of the imprint, with Seneca’s name embarrassingly misspelled on the titlepage.

The History of Rome

This is the first Aldine edition of Livy’s monumental history of Rome, covering the period from the founding of the city through the reign of the emperor Augustus. The first four books were printed by Andrea Torresani from 1518 to 1521. When a manuscript of the missing fifth Decade was discovered at Lorsch by Simon Grynaeus in 1527, Paulus Manutius printed it in 1533 to form a fifth volume of this work. The first four volumes are bound in contemporary goatskin, and the fifth bound by Charles Lewis to match the style. The Latin phrase ab exemplis perfectum fluit omne vero (“from these examples all perfection truly flows”) extends in blind stamp across the upper and lower covers of all five volumes. The phrase is not from Livy, but speaks to the universal insights to be derived from a study of Roman history.

The Editio Princeps of the Greek Bible

In 1494 Aldus Manutius announced his intent to print the Bible, but left it to his heirs to carry through on that commitment. A unique trial sheet of a polyglot Bible (shown in facsimile in the Bibliography section of this exhibition) survives as testament to Aldus’s original intent. Erasmus had already edited and published the Greek New Testament in 1516, and to that Gian Francesco Torresani added his own edition of the Greek Old Testament for this 1518 Aldine publication. The Complutensian Polyglot Bible was printed between 1514 and 1517, but publication was delayed until after Pope Leo X approved it in March 1520, making the Aldine edition the editio princeps of the whole Greek Bible. This copy is bound in contemporary Venetian goatskin, blind-tooled in a multi-panel design.

Bellisario Bulgarini (in Latin, Bellisarius de Bulgarinis, 1539–1619), a patrician from Siena, poet, littérateur, and diplomat, was a member of the Accademia degli Intronati in his native city, and a member of the Accademia Veneziana in the Most Serene Republic. He collected a substantial library during the last half-century of his life, and maintained the interesting habit of annotating his books with the names of the sources from whom he acquired them and the prices he paid. Bulgarini bought this then-70-year-old book in 1592 from Luca Bonetto, a printer in Siena, for one silver lira.  Pietro Alcionio (1487–1527), Aristotelian scholar and professor of Greek at Florence from 1522 until his death, created this imaginary dialogue between Giulio de’ Medici (subsequently Pope Clement VII, and cousin of Leo X) and Lorenzino de’ Medici. Set in 1512, when Giulio was a papal legate, it is dedicated to Nicolaus Schönberg, professor of theology at Rome.

This only Aldine edition of the Roman comic playwright Plautus was edited by Gian Francesco Torresani, but in his preface he claims to have relied on editorial work conducted by Aldus Manutius and Erasmus in 1508, when Erasmus was living with Aldus and working on the publication of his Adages. Bound in contemporary Italian blind-tooled goatskin. Note the lettering Plauti Opera on the top edge, a remnant of an era when books were shelved flat instead of standing up.

A Personal Project for Jean Grolier

Jean Grolier personally suggested that the Aldine Press publish this work on ancient Roman coinage by his friend Guillaume Budé (1467–1540). Correspondence between Grolier and Gian Francesco Torresani reveals that Grolier was intimately involved with this publication. “I ask you repeatedly, I even beg of you, to combine beauty with elegance. Let the paper be spotless, the type of perfect regularity, and a point not to be despised, let the margin be broad … If too much luxury leads you to expense, I will reimburse you for any outlay.” This particular copy was previously owned by Joseph Smith (ca. 1682–1770), the British Consul at Venice from 1744 to 1760, and is specifically mentioned by Renouard for its wide margins.

The Editio Princeps of Hippocrates

The mid-1520s brought an uncharacteristic spate of medical works from the Aldine Press, especially the five-volume folio Galen of 1525. The Heirs of Aldus then published this editio princeps of the Hippocratic corpus, a collection of medical treatises assembled in the third century BCE and traditionally attributed to Hippocrates. Gian Francesco Torresani based this edition on a comparison of two manuscripts, which survive in the Bibliothèque nationale de France and the Biblioteca Marciana in Venice.  This first edition in the original Greek marked a substantial improvement on a Latin translation published the prior year in Rome. Note the warning to counterfeiters at the foot of the titlepage.

The first edition of The Courtier, which sets forth in a series of dialogues the ideal conduct and learning of the perfect Renaissance gentleman. The author, Baldesar Castiglione (1478–1529), ordered 30 copies of this book printed on large paper, ostensibly as presentation copies, of which this is one. Bound in contemporary Italian goatskin, with the signature of Benedetto Accolti (1497–1549), Cardinal of Ravenna, on the titlepage.

← Flattery and Forgery
Paulus Manutius →
The Heirs of Aldus