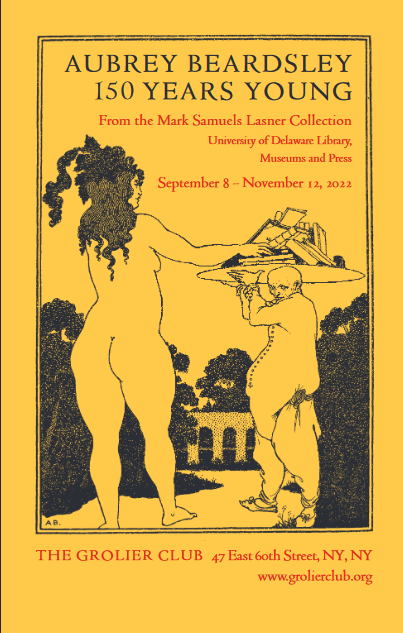 From the Mark Samuels Lasner Collection, University of Delaware Library, Museums and Press

He drew a portrait of a friend as a giant fetus in evening dress. He wrote an unfinished fantasy in which Venus masturbated her pet unicorn. He produced a theatrical poster that upstaged the plays it advertised by depicting an uncorseted woman with loose hair and her clothes slipping off. He decorated his illustrations for books and magazines with swollen penises and scattered images everywhere of hands reaching for genitalia. That was Aubrey Beardsley (1872–1898), who was born in England 150 years ago and died at the tragically early age of twenty-five. Had he lived decades longer, it is doubtful he would have gotten any older in mind or spirit. His biographer, Matthew Sturgis, quotes him as exclaiming delightedly to a London editor in 1896, “What a clever boy I am,” and he remained a clever boy to the end.

Yet Beardsley was also far more than that: an artistic genius, a modern innovator in form and design, as well as a cultural radical and provocateur. Beardsley’s approach could be summed up as playfulness, even outrageousness, with a purpose. His work promoted gender non-conformity in the social sphere, but also the equality of visual images with literary texts in the realms of periodical and book publishing. He reshaped notions of how to deploy black and white in prints and drawings, championed photomechanical reproduction and made art for the mass market, led the way in creating posters that dazzled the public, and turned affordable books into spectacular objects with gorgeous bindings. Although he was characterized as a British Decadent, Beardsley's orientation was international, embracing influences from French and American literature, Japanese prints, German opera, and European art nouveau. Because of this, his effect on the arts has always been global, both during his lifetime and today.

The items on display are all drawn from the Mark Samuels Lasner Collection, which is part of the University of Delaware Library, Museums and Press in Newark, Delaware. This collection is remarkable not only for its holdings related to Beardsley—including prints, drawings, watercolors, photographs, posters, manuscripts, first editions, proofs, association and presentation copies of books, periodicals, theater programs, and paper ephemera—but for a wealth of material by Beardsley’s contemporaries and also by his Victorian predecessors, especially the British Pre-Raphaelites. It was assembled by a long-time Grolier Club member, Mark Samuels Lasner, and reflects both his own interests and expertise and those of his partner, Margaret D. Stetz, the Mae and Robert Carter Professor of Women’s Studies and Professor of Humanities at the University of Delaware. They have curated this exhibition.

As well as being a noted collector, Mark Samuels Lasner is a distinguished scholar, writer, editor, and bibliographer, who has contributed enormously to book history and art history despite being legally blind. Beardsley lived and worked with the shadow of death from tuberculosis hanging over him. Samuels Lasner has spent his life under the literal shadow of extremely low vision; yet he too has never ceased being witty, determined, and sometimes naughty.