Magazines and the American Experience: Highlights from the Collection of Steven Lomazow, M.D. 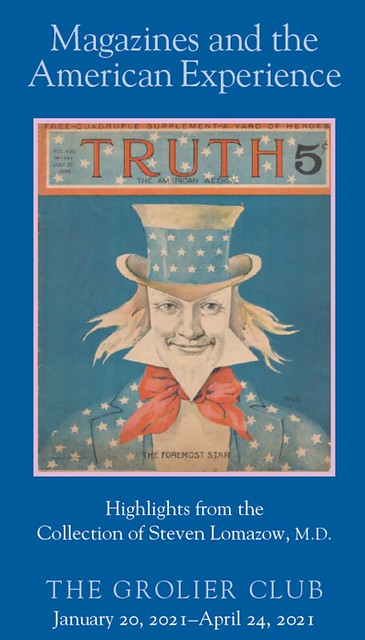 Magazines and the American Experience:

Highlights from the Collection of Steven Lomazow, M.D.

The first successful magazine proudly proclaimed itself as The American Magazine in 1744. Magazines in the colonial era became the clarions of revolutionary thought, and the first printed statement of American independence appeared in Thomas Paine’s Pennsylvania Magazine in June 1776. At the outset of the nineteenth century, magazines documented the origins of the political schism between Federalism and states’ rights that remains a subject of bitter debate to this day.

As publishing expanded, magazines fostered the development of distinct communities of Americans by creating networks of communication, much as the internet does in today’s digital age. We learn from them the history and development of American farmers and tradesmen; women and children; poets, humorists, artisans, reformers and religious groups of every denomination and ethnicity. Magazines and the American Experience is a celebration of this vitally important American medium.

The exhibition is presented in two sections, beginning with a chronological history of American magazines from 1733 to the present. The second is devoted to a broad spectrum of genres which address the areas of popular culture that became a major focus of American magazines in the late nineteenth and twentieth centuries, including American artists and humorists, the ongoing struggle of African Americans to achieve equality, a salute to our national game of baseball, and the development of radio, television, and motion pictures.

The accompanying catalogue expands upon the exhibition with a series of essays by leading historians of publishing, enhanced by over four hundred illustrations.