The Dolphin and Anchor 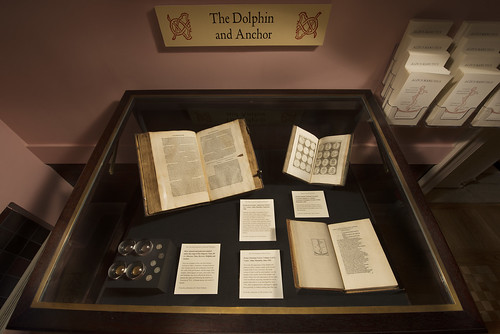 Why Aldus Chose the Dolphin and Anchor

Although a first edition was printed in Paris in 1500, this edition of the Adages was greatly revised and enlarged by Erasmus in 1508 while he was living with Aldus in Venice. In his commentary on the motto festina lente (“make haste slowly”), Erasmus claims that Pietro Bembo showed Aldus a denarius minted during the reign of the emperor Titus, noting that the image of the dolphin and anchor succinctly reflected Aldus’s twin objectives: the dolphin symbolizing speed of production, while the anchor denotes stability of purpose.

This is the first appearance of the dolphin and anchor as Aldus’s printer’s mark, in the second volume of the Poetae Christiani. The initial version of what would be used regularly over the decades is this smaller form of the dolphin and anchor within twin rules that enclose all four sides of the woodblock engraving. Intended for use in quartos and octavos, it was developed by June 1502, when it appeared here, and began to appear more generally in Aldines from later that year.

The Coin that Launched a Thousand Titlepages

Silver denarii and gold aurei minted under the reign of the Emperor Titus, 80 CE.  Obverse: Titus. Reverse: Dolphin and Anchor.

These are examples of the coin that Erasmus claimed as Aldus’s inspiration. Romans believed that volcanic activity and earthquakes were both the work of the god Neptune, and the image of the dolphin, which appears on many coins under Titus and Domitian, may have reflected the desire to appease the angry god following the eruption of Vesuvius in 79 CE. A Roman aureus was worth 25 denarii.

This collection of portraits of Roman emperors found on coins and medals includes an image of the Aldine denarius in the middle column of the right hand page.