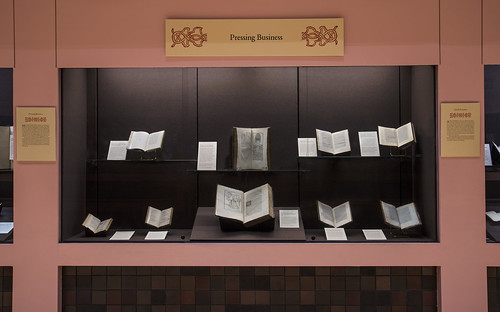 The Inspiration for Bembo Type

This short tale of a journey to Mount Aetna undertaken by Pietro Bembo (1470–1547) and his father, Bernardo, was printed in a new Roman font designed and cut for Aldus by Francesco Griffo (1450–1518). Its elegant simplicity has inspired type designers to this day, and is arguably the most influential design in the history of typography. This text, as in most copies, contains manuscript corrections in the hand of Aldus. Bound in green goatskin by Samuel Charles Kalthoeber for George John, Lord Spencer (1758–1834), it was subsequently in the John Rylands Library in Manchester.

Following the five italic words printed in the St. Catherine of Siena of 1500, this Virgil of 1501 is the first complete book to be printed in italic type. Arguments that italic type enabled more words to fit on the page, thereby saving paper and lowering costs, have proven unfounded. It is clear from Aldus’s petition for legal protection that his italic font was meant to mimic humanist handwriting, thereby borrowing from the look and feel of the manuscript tradition. Professor Randall McLeod of the University of Toronto has demonstrated, through a comparison of type and ligatures, that Aldus Manutius and Francesco Griffo continued to develop and refine italic type even while this Virgil was in the press. The text is open to the familiar opening lines of the Aeneid.

From the Junius Spencer Morgan Collection of Virgil at Princeton University.

Horace concludes the third book of his Odes by stating—proudly, prophetically, and accurately―that he had established his own immortality.  Odes III.30 opens with the immortal words Exegi monumentum aere perennius, “I have finished a monument more lasting than bronze.” It has served as the model for the sub-title of this exhibition. This is the second book printed by Aldus in his new italic type.

The First Appearance of Italic Type

The woodcut image of the mystic St. Catherine (1347–1380) includes the first words ever printed in italic type, iesu dolce | iesu amore in the book in her right hand, and iesus in the heart in her left hand. The font, cut by Francesco Griffo (1450–1518), was modeled on humanist handwriting of the day, with some scholars concluding that the model was Aldus’s own hand. Italic type found its full expression in the Latin octavos that Aldus was to begin printing in 1501.

The most celebrated illustrated book of the Italian Renaissance, the Hypnerotomachia Poliphili (“The Strife of Love in a Dream by Polia’s Lover”) is also the most enigmatic.  Scholars have debated the identity of the author and artist for centuries, with opinions now settled on the authorship of the Dominican Friar Francesco Colonna and the woodcuts of the Paduan miniaturist Benedetto Bordone. The text is written in a curious hybrid of Latin and Italian, and tells the story of Polifilo’s search for his long-lost love, Polia. His dreamlike wanderings through elaborate woodcut architectural and pastoral scenes have as many interpretations as there are interpreters.  The book is a masterpiece of integrated text and design, and influences designers to this day.

The Hand of Aldus

Alessandro Benedetti was a well-known Venetian doctor who lent his services to the 1495 campaign to curb the incursions of the French King Charles VIII into Italian territory. This is an example of contract printing carried out by the Aldine Press in the early years of its existence.  Benedetti paid for the printing, and Aldus’s name appears nowhere in the text. The speed with which this narrative was printed led inevitably to errors, many of which are corrected in hand (as shown here), possibly by Aldus himself.

State Your Business and Immediately Go Away

This volume of various rhetorical works of Cicero and ps.-Cicero provides enlightening and amusing insight into the daily life of Aldus Manutius. In the preface, Aldus complains to the poet Andrea Navagero (1483–1529) of the number of visitors who constantly disturb his work, to the point that he places a sign over the door to his office to thwart their interruptions. The capitalized passage in the preface captures the text of his sign:

“Whoever you are, Aldus asks you again and again what it is you want from him.  State your business briefly, and then immediately go away, unless like Hercules you come to support the arms of weary Atlas.  For there will always be something to do, both for you and for however many other feet come this way.”

The First Description of Syphilis

Niccolò Leoniceno (1428–1524) was a professor of medicine at Ferrara, a close friend of Aldus’s, and one of the editors of the Aldine Aristotle. In this short treatise he describes the outbreak of a disease in the French army during the siege of Naples in 1495 (hence morbum Gallicum), and determines that the disease is not new, but one that recurs throughout history and often accompanies armies on the march. Bound by Charles Hering for George John, Lord Spencer (1758–1834).

An 18th-Century Aldine Facsimile on Vellum

In the late 18th century the French collector and bookseller Charles Chardin (1748–ca. 1827) commissioned a number of pen facsimiles on vellum of rare Aldines that he had been unable to obtain. His 1824 sale included this volume, as well as copies figurées sur vélin of the 1495 Musaeus and the 1495 de Aetna. The work is attributed to the calligrapher F. F. Fyot. Bound in crimson goatskin by François Bozerian (dit le Jeune, 1765–1818), and later owned by Sir John Hayford Thorold of Syston Park (1734–1815).