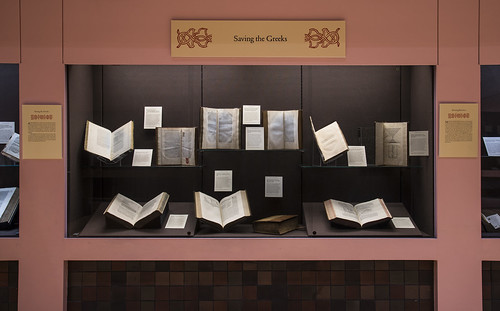 A Greek Text for the Students of Battista Guarino

In addition to Theocritus, this volume includes the editiones principes of many of the works of Theognis, Hesiod, and other Greek poets. The book opens with an introductory letter addressed by Aldus to his former teacher Battista Guarino, in which he states, “Here, most illustrious master, is the Theogonia of Hesiod, which you ask me to provide for the public instruction of your pupils.” Bound by Charles Hering for George John, Lord Spencer (1758–1834).

The Magnum Opus of the Aldine Press

The complete works of Aristotle, printed by Aldus between November 1495 and June 1498, would have secured Aldus’s fame as a printer had he printed nothing else. The entire publication, issued separately but often bound in five or six volumes, represented more leaves of Greek type than had cumulatively been printed since the time of Gutenberg. This one volume, including (among other texts) Aristotle’s Metaphysics, is bound in contemporary Bolognese goatskin alla greca, signified by the thick boards flush with the book block, grooved edges, and head- and tailbands that protrude beyond the boards. This style of binding, common on Greek manuscripts of the Middle Ages, was employed as well on bindings of Greek printed books. The text is open to the beginning of Aristotle’s Problemata.

Although printed in Latin, this collection of works by classical and Byzantine neo-platonist writers stands as part of Aldus’s intent to publish the entirety of the Platonic tradition. The book includes works by Iamblichus, Proclus, Psellus, Pythagoras, Xenocrates, and others. The texts were translated and edited by the scholar Marsilio Ficino (1433–1499), and dedicated to Giovanni de' Medici, the future Pope Leo X. From the collections of George John Warren, 5th Baron Vernon (1803–1866), John A. Saks (1913–1983), and George Abrams (1919–2001).

The Oldest Jokes in the Book

The editio princeps of nine of Aristophanes’ comedies, lacking only the Lysistrata and Thesmophoriazusae, which would first be printed by Giunta in 1515. The editor, Marcus Musurus (1470–1512), claims to have consulted and compared many manuscripts in compiling this accurate edition of the texts of the plays, as well as the commentaries that accompany them.  Musurus’s compendium of ancient scholia is printed in smaller Greek type around the lines of the plays. The book is open to the beginning of the Acharnes. Bound in English brown goatskin by Clarke & Bedford.

The Father of History

This is the editio princeps of the first work that can truly be called history in the modern sense.  Rather than a mere chronicle of the events of the Persian Wars, Herodotus’s History attempts to identify cause and effect, while placing the wars into the larger context of Greek history. Each of the chapters is named for one of the nine Muses. In his preface, Aldus claims to have edited and corrected the text from multiple exemplars. Bound in contemporary Roman calf.

The Editio Princeps of Plato

Aldus first committed to publish the works of Plato in 1497, and finally carried through in this editio princeps of 1513. The text is based on manuscripts that Joannes Lascaris brought to Venice from the monasteries on Mount Athos in Greece. Aldus dedicated the volume to Giovanni de’ Medici, the newly elected Pope Leo X, and in the preface sets out his vision for classical studies and the foundation of a Greek academy in Rome. Martin Lowry (in The World of Aldus Manutius) refers to this preface as “one of the most comprehensive statements of the humanist position to be found outside Erasmus.”

The Very Model of Elegance

Poliziano (1454–1494) was a private tutor to the sons of Lorenzo de’ Medici before becoming professor of Greek and Latin at Florence. Although not a classical author, Poliziano was nonetheless admired by Aldus for the elegance of his writing, and this publication may have been intended to serve as a model of elegant Latin and Greek composition. The text includes a few passages that mark Aldus’s first attempts at Hebrew typography. Bound in contemporary German half pigskin over wooden boards.

The editiones principes of the works of the Greek orators, with the exception of Demosthenes, whom Aldus had already issued in 1504. The preliminary materials printed in the first gathering required one more page than anticipated, necessitating the addition of a bifolium.  The last page of the gathering contains no text, only an instruction to the binder in Greek and Latin to remove the leaf, which binders in later years routinely did. As this copy retains its original binding, doubtlessly executed by a binder who read neither language, the “intentionally blank” leaf remains intact.

This editio princeps of Athenaeus’s Sophisticated Diners consists of the conversations of learned men over elaborate meals about a wide variety of subjects, including philosophy, the law, literature, food, medicine, etc. The text is important for its depiction of culinary habits of ancient Greece, and also retains numerous fragments of otherwise unknown Greek poetry. Aldus had intended to print this, the only surviving work of Athenaeus in the 1490s, and a one-page proof in an earlier Aldine Greek type survives at The Morgan Library & Museum. In a contemporary alla greca binding.

An encyclopedic collection of ancient astrological and astronomical texts by authors such as Firmicus Maternus, Marcus Manilius, Aratus, Proclus, and others. Aldus’s dedication letter to his patron and former student Alberto Pio praises the Englishmen Thomas Linacre and William Grocyn for their contributions to the world of letters. Bound in 18th-century English calf for the Earls of Macclesfield at Shirburn Castle, with edges colored red to indicate where individual works begin and end.

← In the Beginning . . .
Pressing Business →
Saving the Greeks