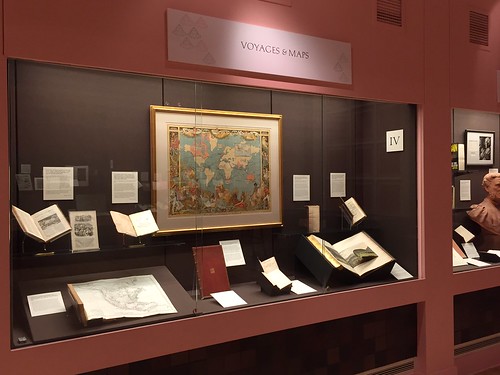 This was an early purchase I made as I started to collect nautical fiction. A few years later I bought some disbound parts and noticed that they were eight-page parts, the subtitle was “Tales of the Ocean,” three of the parts were marked as “Volume II,” and the title of some parts was a woodcut rather than typeset.

At this point I realized that I needed to learn more about nineteenth-century book printing and production practices. And each time I look at this book there‘s more to discover. A comparison of the first and second editions shows that the woodcut has been replaced.Cambridge University’s copy of the first edition of Volume II is made up of sixteen parts, while I own a disbound Part 17, leaving the question of completeness unanswered. The National Maritime Museum’s first edition is the only copy with a title page (London: Wakelin, 1838). Mansell was the printer and apparently reissued the series in the sixteen-page format shown here.

The British Log Book has been a delight, and while obscure and of slight literary value, it is still full of questions about its printing and publication and an excellent example of the mutability of books issued in parts.

Provenance: Nicolas-Claude Fabri de Peiresc (1580–1637), with his cipher stamped on the cover.

This extremely rare work is the first atlas devoted exclusively to the Americas, and contains the first maps of America to have appeared in any book of geography. Cornelius Wytfliet, a Flemish cartographer, created his maps based on writings by contemporary geographers José de Acosta, Richard Hakluyt, Théodore de Bry and Giovanni Battista Ramusio. The work was intended as a supplement to Ptolemy's Geographia, and covers the history of the first European encounters with North and South America, their geography and natural history. The nineteen double-page, engraved maps include the two hemispheres, Patagonia, Chile, Brazil, Peru, Cuba and Jamaica, Florida, Virginia, Canada, Greenland, and Labrador (among others). All this barely one hundred years after Columbus sailed perilously across the seas to discover the New World!

This particular copy is also fascinating for its provenance. Nicholas-Claude Fabri de Peiresc was one of the leading French intellectuals and bibliophiles of his day, friend to Galileo as well as the Cardinal Richelieu, the painter Peter Paul Rubens, and french poet François de Malherbe, among others. He was a counselor to the provincial parliament, a brilliant and prolific man of letters, a talented astronomist and scientist, and one of the most eminent collectors of art and antiquities who ever lived.

As a bibliophile, I find terribly exciting the confluence of this major and groundbreaking atlas having belonged to such a fascinating and erudite individual. Genius touched by genius!

The first American transcontinental expedition, by Lewis and Clark, to explore the newly acquired Louisiana Purchase and beyond, ended in 1806. However, for various reasons, the official report of that expedition, with map, was not published until 1814. In the meantime, others began to publish some of the much-anticipated information about that trek. This 1809 French map, in a book of travel narratives, is one of the earliest cartographic representations of the route of Lewis and Clark to the Pacific. It is probably based on an early publication by one of the participants, possibly Clark himself or Patrick Gass, author of A Journal of the Voyages and Travels of a Corps of Discovery under the Command of Capt. Lewis and Capt. Clarke … 1804, 1805 & 1806 (1807).

I collect “persuasive” cartography: maps intended primarily to influence opinions or beliefs, rather than to communicate geographic information. Among the earliest and most important examples are maps reinforcing state power, like this one, published during the Colonial and Indian Exhibition of 1886, the year before Queen Victoria’s Golden Jubilee. The map exalts the scope and wealth of the British Empire: the Canadian trapper, Colonial hunter and South African planter; the watchful British soldier and sailor; elegant ladies in furs and gowns alongside indigenous peoples. The intellectual leader of cartographic deconstruction, Brian Harley, wrote that “As much as guns and warships, maps have been the weapons of imperialism” (The New Nature of Maps, 57)—citing this map to illustrate the point!

There is an intriguing backstory. The source of the map’s statistical data is named, but not the mapmaker. We now know that the map was prepared by the illustrator Walter Crane; the lower left corner of the map bears his tiny mark. The failure to attribute the map to Crane was likely political: he was an activist whose cartoons frequently appeared in prominent socialist publications. Crane, however, sent his own message. The three figures at the top of the map display a slogan unrelated to the Imperial Federation Movement, but much like “Liberté, Égalité, Fraternité.” Indeed, they each wear the red Phrygian cap of liberated Roman slaves—the symbol of the French revolution. And while Britannia sits proudly astride the world, the novel sash across the chest of Atlas reads: “Human Labour.”

Polar Almanac, for the Year of Our Lord 1854, being the Seventeenth Year of the Reign of Her Majesty Queen Victoria. Printed on Board of Her Majesty’s Ship Enterprise, in Camden Bay, Latitude 70º08' North, Longitude 145º29' West, Camden Bay, [Alaska]: Henry Hester, [1853].

Provenance: Henry Hester’s copy, with his signature on the title page.

The first book printed in Alaska, and one of only four known copies. This copy also has numerous pencil annotations, probably added at a later date by Henry Hester, the book’s printer. Hester must have taken great pride in his handiwork, as he had Jane, Lady Franklin and Queen Emma of Hawaii personally inscribe this copy. And a copy of the Almanac was lent to the Caxton Celebration in London in 1877 by Thomas Hester (perhaps this copy).

My main collecting interest is first hand accounts of Arctic voyages, but Arctic printing has always held a fascination for me as well. The extreme conditions and limited resources early amateur printers faced must have obviously presented great challenges. I missed this copy over twenty years ago and was very happy to get a second chance to acquire it.