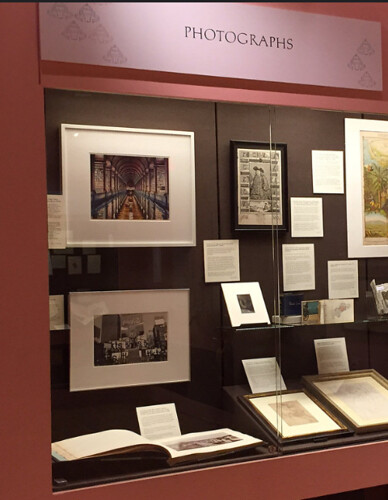 A souvenir travel album representing highlights in photography of the major architectural and archaeological sites of southern Italy. Carlo Brogi and his son Giacomo, along with the Fratelli Alinari, were Italy’s leading nineteenth-century documentary photographers and prepared elegant albums of original albumen photographs for purchase by mostly British, American and German tourists.

Depicted is a view of Pompeii with Mt. Vesuvius in the background, among the chief destinations for visitors to Naples and environs following Pompeii’s excavation in the mid-eighteenth century.

Collecting travel albums is an adjunct to my interests in photography and European prints, especially of the late Renaissance and Baroque periods.

I have always collected books and other works on paper, so at the age of eighty, despite giving collections to libraries in my zone of affection, my house is pretty full. Idea: collect something not as space consuming as books … like photographs.

I collect “folk photography,” images rapidly produced at amusement parks or by itinerant photographers in small-town or rural America, places where photographs were otherwise a luxury. I concentrate onportraits of persons posed with a crescent moon prop, many of the props painted as the face of the man in the moon. The resulting images range among couples in a holiday mood, children with or without adults, dogs and cats, and sober-faced family groups dressed for the camera. Why would anyone want a portrait taken with the man in the moon or any crescent moon prop?

Most of these images are now found as “real photo postcards,” popular during the early twentieth century and, much less frequently, as exhibited, in the earlier form of tintypes.

Lee Friedlander’s New York City, 1974 was one of the first photographs I acquired. It is a keystone image in Friedlander’s book, American Monuments, whose theme is the tension between our (sincere, if sentimental) respect for our heroes and the prosaic, sometimes chaotic reality of our lives. Like every great work of art, its lessons are indelible once grasped. In time I gradually came to understand the reason I loved photography in general, and this approach to the medium in particular. Rendering visual facts, plainly and clearly can express complex ideas and powerful emotions. While building a collection is fun, the journey of discovery towards understanding what moves you and why is much more so.

Candida Hӧfer’s “photographs are sober and restrained in feel—the atmosphere is disturbed by neither visitors nor users, especially as she forgoes any staging of the locations. The emptiness is imbued with substance by a subtle attention to colour, and the prevailing silence instilled with a metaphysical quality that gives voice to the objects, over and above the eloquence of the furnishings and the pathos of the architecture….” This crisp description of Höfer’s artistry can be found, along with Trinity College Library Dublin I, in her book of photographs, Libraries (2005).

Aside from the brilliance of this composition, which presents Trinity College Library as a "chambered nautilus" of receding spaces, I responded to this photograph, purchased at a satellite fair of Art Basel Miami Beach, because of the library depicted. My graduate thesis was on the art criticism of Samuel Beckett.  A further expansion of the scope of the topic to include a wide swath of the writer's critical output necessitated investigations into the “systems” of Dante, Bruno, Vico and Joyce, among other great thinkers. This photograph is a reminder to me of the great erudition that informs all of Beckett's oeuvre, and the venerable institution that helped foster his imagination.

The greatest of Victorian photographers and arguably of all nineteenth-century photo-portraitists, Julia Margaret Cameron is a model to women professionals. Given a camera at age forty-eight, she dedicated herself to mastering the taxing wet collodion process in order to portray the “Great men and Fair women” she felt privileged to know. Among them was Poet Laureate Alfred, Lord Tennyson, who invited her to illustrate his 1874 edition of Idylls of the King. Cameron made two dozen prints from a purported 245 negatives, using a short focal-length lens to achieve her signature selective focus, a photographic evocation of Old Master painterliness. Her goal was “to ennoble photography and to secure for it the character and uses of High art by combining the real and ideal and sacrificing nothing of Truth by all possible devotion to Poetry and beauty.” Did she do all that? In retrospect—perhaps!

Her sitter for Camelot’s betrayed, doomed monarch was William Warder, a porter at dockside near Freshwater, the Camerons’ Isle of Wight home. This print is the oldest and dearest in my modest collection of photographs by women.

This print is part of an elegant series in which each image of New Mexico’s Rancho de Taos church has its own palette based on the moment’s reflected light.

As with Monet’s paintings of the Rouen Cathedral, Douglas Keats created a significant body of photographs with different moods over the course of a year. Using the the same iconic Ranchos de Taos church, Keats, along with Ansel Adams, Paul Strand, Georgia O’Keefe and John Marin, memorialized the deep-rooted, timeless Spanish Southwest culture.

The print was rendered at the Atelier Fresson in Paris with a proprietary technique developed in the 1880s. Each print requires six hours to produce through a four-color separation process. The handmade paper and layered inks produce textures echoing Ranchos de Taos’s hand-plastered, stucco structure.