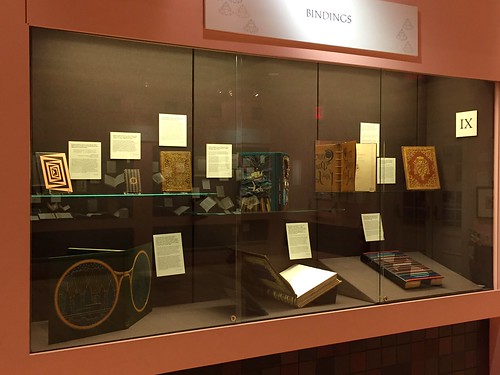 This copy of The Tempest is housed in an extraordinary commission binding by my good friend George Kirkpatrick. But it is the story of how the binding came to be that makes it most special for me.

In 2012, George had a major stroke and was told that he would never work again. To motivate him to overcome this, I sent him the sheets of The Tempest (the text is from the 1623 First Folio) and asked him to bind them and enter it in an upcoming international designer binding competition. He refused, but I persisted, and he eventually conceded.

When I saw the wonderful binding, I grew alarmed because the terms of the competition gave Gordon Getty the right to buy the first- and second-prize winners. So I sent George a second set of the sheets to create an identical binding, except for a personal notation on the rear doublure made of leather. George's binding won one of the third-prize distinguished book awards (he should have won the first prize) and he has now resumed his career as a master designer binder.

One of the rarest items in my collection of American nineteenth-century cloth bindings is this exemplar that combines both stripes and dots. Striped cloth, all of which was imported from England, was the most uncommon used by American binders roughly between the mid-1830s to the early/mid-1850s, when it disappeared from use. Polka dot bindings appeared in the late 1840s, so I would classify this cloth as primarily a striped binding. Still, with the addition of the dot pattern within one of the bands, it is highly unusual, as polka dot cloth appeared at this time almost exclusively in England.

The fair page, like good food, is nourishing: we wish to linger and graze upon it …

the complete book lover knows there can be … the sheer enjoyment of its flavor.

David Greenhood, “The Book as an Aesthetic

Indeed, the flavor of my collecting interest came to me like a secreted dessert—a treat that has whispered to me and fed me.

I was initially trained in the letterpress and private printing arena. I hold a deep appreciation for typography and a well-set page, but also for the writing and production of an entire book. Eventually my fascination with this led to bookbinding—and as a final path that seemed to hold both printing and binding aloft, to designer binding. My personal aesthetic first led me to the tomes that started my library; growing it has become an unexpected joy. Designer bindings are what I collect, giving Greenhood's nourishment in a sumptuous manner: as a cover to the finest that literature has to offer.

L. Frank Baum. The Wonderful Wizard of Oz. Illustrated with 62 woodcut illustrations by Barry Moser, with an appreciation by Justin G. Schiller. West Hatfield, MA: Pennyroyal Press, 1985. No. 79 of 350 copies, with presentation and pencil vignette by Moser dated 15 January 1986.

My life with books began with collecting The Wizard of Oz and its sequels at age eight and by 1956 (age twelve), a selection from my library was loaned to Columbia University Libraries for its centenary exhibition honoring L. Frank Baum. That was also the year CBS televised the MGM film and borrowed my first edition (1900) for its emcee Bert Lahr to use when introducing the movie; on that occasion I was one of two children on his lap, the other was Liza Minnelli, Judy Garland’s daughter. Fast forward thirty-five years: I first saw this Michael Wilcox binding on exhibit at The Grolier Club in 1990, and when the Elkind Library came up for sale at Sotheby’s New York in 1994, I was fortunate to purchase it.

Whereas Moser chiefly illustrated the Oz text using American political personalities as models, Wilcox adapted famous symbols of popular American culture: the Wizard is Harry Houdini and Shirley Temple is Dorothy, not only MGM’s first choice for the role but also a national symbol of the ideal child. New York in gold outline becomes Oz. The gateway into the city runs along the Manhattan Bridge. Within the two circles are representations of the tower of the Jefferson Court House, the Empire State Building and the Chrysler Building to the far left. The combination of colors appears like modern motorways with overpasses and underpasses, but only the yellow-colored road leads to the Emerald City.

A fine forgery of a Grolier binding by Louis Hagué, from my “fake bindings” collection. The famous Belgian binder Hagué (1822 or 1823–91) was probably the most skillful forger of his time. Active in Brussels between 1875 and his death, he produced bindings purporting to be sixteenth-century French. The present book is the second Froben edition of Lazare de Baïf’s illustrated trilogy of studies on ancient manufactures. In 1888, a catalogue of Bernard Quaritch described this sumptuous copy: “The wonderful freshness and perfect preservation of this beautiful binding have led to doubts being thrown upon its genuineness, some persons even going so far as to allege that it is a modern fabrication” (B. Quaritch, Catalogue 99, 1888, no. 124). The work executed by Hagué on this copy was remarkably credible at the time by its coherence and its precision, in spite of the use of painting to realize the interlaced designs, and also of the motto “Tanquam ventus est vita mea,” which has nothing to do with Grolier himself.

Maurice de Vlaminck was a noted artist, writer, musician, bicycle racer, and anarchist. This posthumously published book includes original lithographs he made late in life to accompany a literary work he wrote and published in 1934. As an artist, he is closely associated with Henri Matisse and André Derain, with whom he exhibited in the Salon d’Automne in 1905. It was in that show that Vlaminck and the others earned the derisive title “fauves,” or wild beasts, due to their bold and not representational use of color and brush strokes. The lithographs in this book, although done much later, reflect this style.

The publisher issued the book in loose gatherings and this copy is housed in a unique signed binding by Pierre-Lucien Martin (1913–85). With innovative designs that departed from structured decorative symmetry, Martin has often been considered the aesthetic successor to the legendary French binder Paul Bonet.