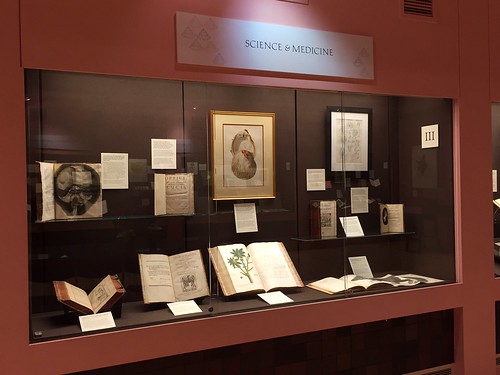 Micrographia: or some physiological descriptions of minute bodies made by magnifying glasses with observations and inquiries thereupon. London: John Martyn and James Allestry, 1665.

In his bibliography of Robert Hooke’s work, Sir Geoffrey Keynes ranked the Micrographia of Robert Hooke “among the most important books ever published in the history of science” (Oxford, 1960, xi), and it has been described as enjoying “immediate success” (Printing and the Mind of Man, 1967, 88). Its magnificent plates illustrate Hooke’s microscopic—and telescopic—observations, and the work continues to attract the attention of scholars in a variety of fields. For example, Meghan Doherty has noted in her recent prize-winning study that when Hooke looked through a microscope, having adding “artificial Organs to the natural,” he “saw what others did not or could not,” in part because of “his early training and lifelong interest in the arts” (“Discovering the ‘true form’: Hooke’s Micrographia and the visual vocabulary of engraved portraits,” in Notes and Records: The Royal Society Journal of the History of Science, September 2012:211). Illustrations from this copy of Micrographia appeared in Doherty's article.

My copy was owned at one point by the Sion College Library; my wife and I donated it to the Department of Special Collections, Memorial Library, University of Wisconsin-Madison, as part of the Daniel and Eleanor Albert Collection.

Ernst Haeckel was a prominent scientist and proponent of Darwinian evolution. Many of the illustrations from this work, "art forms in nature," show creatures arranged artfully and rendered scientifically accurate. Haeckel's art was widely credited as important to science and influential to artists.

I've always been drawn to Haeckel's beautiful illustrations, especially the monochrome views, from Kunstformen der natur, all of which are tightly composed and neatly described in adjacent keys.

This lithograph of the ptenophorae (pronounced TEEN-o-four) is one of one hundred prints produced as part of this work. They were sold in folders of ten prints and later as complete sets of loose prints in book-shaped, paper-covered wood boxes.

Monograph on the Aye-Aye (Chiromys madagascariensis, Cuvier). London: Printed by Taylor and Francis, 1863.

Provenance: Inscribed to The Rev. Dr. Whewell, F.R.S. “from his friend, the Author.”

Four years after Darwin’s Origin of Species, Richard Owen published this work on the aye-aye, a rare lemur with large ears and a long finger used to locate and extract grubs from wood. In opposition to Darwin, Owen ascribed the animal’s adaptations to a creationist origin rather than to natural selection.

For over fifty years, I have been fascinated by the contentious history of evolutionary biology, and have collected books published before and after Darwin’s Origin. William Whewell (1794-1866) had a profound influence on Darwin’s arguments in the Origin, but like his friend Owen, he was an anti-evolutionist. The aye-aye genome published in 2011 confirms that man shares a common ancestor, strong evidence for natural selection!

A Curious Herbal, Containing Five Hundred Cuts of the Most Useful Plants, which are now used in the Practice of Physick, Vol. I. London: Printed for Samuel Harding, 1737.

In the eighteenth and nineteenth centuries few women authored botanical books. The author and illustrator that started me on collecting botanical books, Mrs. Loudon (Jane Wells), wrote books to pay off her husband’s debts. A century earlier, Elizabeth Blackwell had done the same. Blackwell also had the advantage of receiving advice and encouragement from prominent medical professionals and access to plants at the Chelsea Physic Garden. She not only drew and engraved the plates but also hand-colored them, three processes that were usually executed by separate artists.

During the eighteenth century, explorers finding hitherto unknown flora brought many of these plant specimens back to England. This drove a need by physicians and apothecaries for an herbal that described these new species. A Curious Herbal successfully met this need and also enabled Blackwell to free her husband from debtors’ prison.

I have always sought to collect books on optics that were actually read, used, and carried some intellectual heft. This translation of Opticks (1704) was the mechanism by which Newton’s optical ideas achieved their wide impact. It permitted all of Europe to study Newton’s experiments and conclusions regarding the nature of light and color. And it was Optice, not Opticks, that began to be cited in 1709 in continental scientific works.

Optice augmented the brief, final Queries of Opticks with bold, speculative essays that set the terms of inquiry into optics for the rest of the eighteenth century. Though Queries 18 and 19 are well known—asking whether light was a wave or a particle—it is Query 20 that adds bibliographic interest to Optice’s intellectual importance. It asked if infinite, empty space wasn’t the “Sensorium of God.” Before printing of this edition was completed, Newton and Clarke decided this was too bold. Clarke revised the paragraph and weakened the statement to a simile by adding the Latin tanquam (as if, as it were), resulting in the cancel at Ss1. But a few copies had already left the printer without the cancel, and one of these ended up in Leibnitz’s hands, who objected to the idea of God having a physical sensorium. The issue was debated in the later Clarke-Leibnitz correspondence of 1715–16. Most copies of the Optice of 1706 have the cancel. This copy does not, retaining the original leaf and thus revealing the text of Newton’s original thought.

This lithograph is one of 482 plates (of which 345 are colored) found in Illustrations conchyliologiques, one of the rarest (and certainly one of the most beautiful) of all color-plate shell books. It was published in four parts, and the copy in my collection is bound in three folio volumes (about 19 inches tall). The French naturalist Jean Charles Chenu was the curator of the enormous shell collection of Baron Delessert, to whom this work is dedicated. Chenu wrote extensively on mollusca and other natural history subjects.

Jim Needham and I collected shell books together for over thirty-five years. Grow­ing up, I had spent summers on the coast of North Carolina, whose beaches are a rich source of shells deposited by the Gulf Stream. I had a small malacology collection. In the mid-1980s at a print show in New York City, Jim purchased a number of colored plates from a broken copy of Chenu. These Chenu plates have adorned the walls of our apartment ever since.

Contemporary blind-stamped pigskin over wooden boards, with the arms on covers in blind of the city of Breslau or Wroclaw in Silesia, Poland on both covers, eight chased brass corners, and two original clasps and catches.

This copy is the first edition and very rare second issue of Brahe’s most important work, with numerous contemporary annotations. Brahe was the last major astronomer to work without the aid of a telescope. His “Astronomiae instauratae progymnasmata was produced in 1602 by the author’s own press at Uraniborg, and only a small number were printed for dedication purposes. It contains important investigations on the new star of 1572 which Brahe had discovered in Cassiopeia. This discovery led to far-reaching consequences in the history of astronomy as this work became the foundation on which Kepler, and later Newton, built their astronomical systems.” (Sparrow, Milestones of Science, 12.)

“‘Tycho possesses the best observations and consequently, as it were, the material for the erection of a new structure … He lacks only the architect who uses all this according to a plan. For, even though he also possesses a rather happy talent and true architectural ability, still he was hindered by the diversity of the phenomena as well as by the fact that the truth lies hidden exceedingly deep within them. Now old age steals upon him, weakening his intellect and other faculties or, after a few years, will so weaken them that it will be difficult for him to accomplish everything alone.’ With this insight, Kepler came to understand the task that lay before him. He considered himself summoned as the architect who should erect the new structure ...” (Caspar, Kepler, 102–3.) “Tycho began printing his principal work at his Uraniborg observatory on the island of Hveen, but the ‘Exercises in the Reform of Astronomy’ was finally published posthumously at Prague in 1602 with an appendix by Kepler.” (Gingerich, Rara Astronomica, 24.)

Provenance: Pope Clement XI (born G. F. Albani), with the large engraved papal shield vignette and small circular Albani stamp on the title page; bound in contemporary calf, with the shield of Clement XI as pope on the front and rear covers, with endpapers characteristic of Albani family bindings.

In 1705, responding to a perceived epidemic of sudden deaths that the Roman populace viewed as evidence of divine displeasure, Pope Clement XI authorized the papal physician, Giovanni Maria Lancisi, to perform autopsies on selected victims in search of an alternative explanation for these alarming events. Lancisi dedicated the resulting report, De subitaneis mortibus, to the pope. The book established that severe but unsuspected heart disease and other known disorders were the cause of death in most of the subjects. It successfully allayed public fears of divine retribution and also serves as the foundation for a modern understanding of cardiac pathology. Additional works of medical importance, including texts on climate, influenza, and malaria were published by Lancisi during the second decade of the eighteenth century and were dedicated to the pope and to his nephew, Cardinal Annibale Albani.

This is a dedicatee copy of one of the most important books in the history of cardiology, with a type “C” title page vignette and nine-line errata variant of multiple distinct states of the first edition, in a binding for Clement XI as pope and subsequently residing in the collections of the Albani family. As family fortunes declined during the nineteenth century, many Albani books were dispersed and some found their way to auction.

Many bibliophiles find themselves in that inevitable chase for elusive desideratum, and for fifty frustrating years mine were these two pamphlets because they were central to my scientific life. Twice I lost them at auction. Twelve years ago they appeared as the only scientific lot in an auction of literature. They were mine!

Itard demonstrated for the first time in the history of scientific thought that there are critical periods for language acquisition, and that intelligence is shaped by the interaction of intrinsic and extrinsic factors. His discovery derived from his understanding of “the wild boy of Aveyron” as an “experiment of nature.” A youth was found living alone in the forest, without human contact and devoid of language and, in spite of his high intelligence and efforts to teach him, he could not develop the ability to speak. Although the boy had exquisite auditory acuity, he was unresponsive—as if “deaf”—to speech sounds. This stunning paradox lies at the base of modern scientific understanding of language acquisition.

Micrographia: or some physiological descriptions of minute bodies made by magnifying glasses with observations and inquiries thereupon. London: John Martyn and James Allestry, 1665.

Micrographia is the most influential work in the history of microscopy. Published by order of the Royal Society in London, it is a remarkable work documenting early experimental science. Robert Hooke, secretary to the society, relied on “a sincere hand and a faithful eye” to record things as they appeared, and established the use of the compound microscope as a primary investigative tool in the sciences more than seventy-five years after its actual invention. Micrographia is also known for its splendid copperplate engravings of “minute bodies.” Perhaps most famous is the engraving of the louse, which appears across a fold-out page nearly two feet long and is the icon of microscopy. My book collection centers on the history of science and, in particular, microscopy, and this book is the centerpiece of my collection.