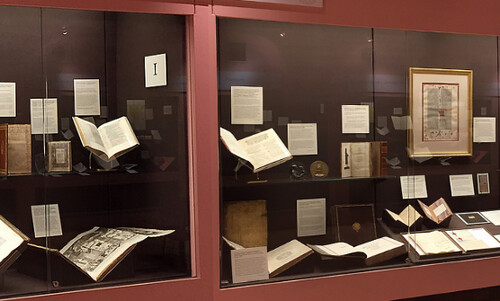 This preliminary version of the Nakaz (or Instruction) is interleaved with manuscript contemporary notes, possibly by a delegate to the Assembly that Catherine II convened in 1767 to discuss her draft law code. It is in a sumptuous full red morocco gold-tooled binding (probably of Baltic origin). The ex-libris initials on the title page await identification.

Among the most important law books of the eighteenth century, the Nakaz was composed by Catherine herself, with advice from Voltaire, and influenced by the writings of Montesquieu and other Enlightenment thinkers; printed in numerous editions and languages, the text was disseminated throughout Europe and earned for Catherine the title “the Great.” My very first bibliophilic article was devoted to the Nakaz, published in The American Book Collector (1966) when I was still a law student. I have since published a collected edition of all the major language texts with a substantial scholarly apparatus and bibliography. See W. E. Butler and V. A. Tomsinov (eds.), The Nakaz of Catherine the Great: Collected Texts (2010).

My primary collection is the Aldine Press, but my eye occasionally wanders to other examples of early Venetian printing. This book is a synchronistic history of the world, in which each column represents the chronological calculations of different empires.

Important dates are printed in red ink, carrying on a tradition from the manuscript era, in which key dates were “rubricated,” or literally written in red ink. Each leaf places world events into the chronology of different traditions, such as the Roman or Jewish calendars, or the Greek Olympiads. Displayed here on the lower half of leaf l2r are the recording (in red letters) of the birth of Christ and the inception of a new chronological system (anni domini). A later reference includes an early mention of Johann Gutenberg. Gutenberg is lauded for his “solerti ingenio,” or ”expert skill,” a phrase that Ratdolt uses in the colophon to characterize his own talents.

The previous owner, Abel Berland, was a member of the Grolier Club from 1967 until his death in 2010.

In this translation of Gibbon’s Miscellaneous Works, published during the French Revolution, his letter dated February 18, 1793, was changed:

The struggle is at length over, and poor de Severy[Salomon de Severy, a close friend in Lausanne] is no more!

The anonymous translator notes that he left Gibbon’s French (“anglicisms”) uncorrected; however, someone (translator or printer) adapted Gibbon’s English to reflect contemporary events in France. A fellow Grolierite found this book for me in a dealer’s

Provenance: Richard Götlich, a contemporary Strasbourg physician, with his annotations and signature.

Written ca. 600, this work, first in manuscript and then in print, became the major encyclopedia of the Middle Ages. Isidore, archbishop of Seville, is the source of much of our information about the classical period. Etymologiae contains a broad range of knowledge that became the source for information relied on by Renaissance writers when they developed their ideas of ancient Rome.

Medicine comprises a small section in this large compendium, but the entries discuss common conditions such as coma, apoplexy (accurately described as a sudden hemorrhage), epilepsy, sciatica, and symptoms involving most of the major organs. Etymologiae is among the earliest printed texts to discuss an aspect of medicine. It is clear that, to Isidore, the brain is the seat of intellect, memory, and sensation. There are eight woodcut diagrams, including the first printed map of the world, a “T-O” design.

Provenance: Octavia Wilberforce's copy, with the bookplates of Lavington House and the Wilberforce Library, Backsettown.

John Wilkes, an opposition member of Parliament in the 1760s, wrote The North Briton, published periodicallyin pamphlet form. Charged with seditious libel for North Briton No. 45, he fled to France in 1763, was convicted in absentia and outlawed.

John Williams was likewise convicted at a 1764 trial before Lord Chief Justice Mansfield for publishing No. 45in the second volume of this later collected edition. While he was punished in the pillory, 10,000 onlookers cheered him and collected 200 guineas for him.

The foremost scholar-priest of the sixteenth century and the best-selling author of his time, Erasmus of Rotterdam wrote two books on great professions: humanist manuals for a Christian knight and for a Christian prince. They rank among his most important works.

Enchiridion militis Christiani (The Handbook of a Christian Knight) is addressed to an anonymous wayward soldier, who read it and became an honorable Christian; it was nonetheless intended as a guide for all to achieve a faithful, decent and worthwhile life. Institutio principis Christiani (The Education of a Christian Prince) was written for a young Spanish prince, the future Holy Roman Emperor Charles V. Erasmus offers a humanist view of the intellectual, moral, political and religious standards required for a ruler, and urges the rapprochement of the Catholic and reformed views of Christianity.

François Rasse des Neux (d. 1587), a famous royal surgeon, man of letters, and bibliophile in Paris, was one of the earliest doctor-collectors of printed books. One of my major collections is early manuscripts and printed books related to the learned professions and skilled trades (expanded in scope from Doctors of Medicine after my 1996 member’s exhibition), These post-incunables—written by a great thinker in editions published during his lifetime, concerning occupations, their attendant responsibilities, and broader applicability, with a significant contemporary provenance and binding—are particularly suited to my collecting goals.

Sir Charles Stuart (1779–1845) was British ambassador to France and Russia and envoy to Portugal and Brazil. In 1825, on behalf of Portugal, Sir Charles signed the treaty that recognized Brazil’s independence. A keen bibliophile, his collection was rich in Spanish and Portuguese materials, and was rivaled only by that of the English Romantic poet, Robert Southey.

Poet Laureate for thirty years, Southey’s fame has long been eclipsed by that of his friends William Wordsworth and Samuel Taylor Coleridge, though his verse still enjoys some popularity. Southey was also a prolific prose writer, and History of Brazil chronicles the development of Brazil from when it was first colonized in 1500. Ironically, perhaps his most lasting work, The Story of the Three Bears, is rarely associated with his name.

I began collecting Southey in the late 1960s, and my collection includes over 425 volumes, including presentation copies of first editions, manuscripts, association items, and books from his library, one of which is a “cottonian” binding.

In the Renaissance, these two volumes were thought to be two separate books, but it has since been established that together they form a single work, a doxography, originally written in the fourth century CE. The Eclogues is the first edition of the first part of the whole and the Sententiae is the first edition in both Greek and Latin of the second part. A doxography is a collection of the sayings of famous people and the combined work contains extracts from about 500 Greek authors, many of which are otherwise unrecorded. It has always appealed to me because of the remarkable survival and longevity of the work, the beauty of both books as objects and as subjects of study, and for its romantic associations with the very earliest sources of Western culture and philosophy. The first doxography was the Physikon Doxai of Theophrastus, a student and successor of Aristotle himself.

Provenance: Signed by Billon and with the gilt arms of the Baron de Seillière.

One of the principal theorists of feminism in the sixteenth century, François de Billon served as secretary to Cardinal Jean du Bellay. Billon wrote this ambitious treatise, The Impenetrable Fortress of Women’s Honor, employing allegory and a military vocabulary to develop his feminist argument. Separate chapters are dedicated to the four double bastions of women’s honor (e.g., chastity and honesty; devotion and piety), each prefaced by a marvelous woodcut of a fortress protected entirely by women.

This is the earliest book in my collection of titles by and about women, a subject that I have specialized in for more than thirty years. It satisfies every criterion I search for in an early book: significant content, stunning illustration, provenance, and impeccable condition.

Portrait medal of Louis XIV and Anne of Austria, 1638.

This medal is one of my favorites because it departs from the usual profile portrait to depict a scene of unusual tenderness, reflecting the deep emotions felt by the recently widowed queen as she expresses both her gratitude to God for giving her a son and the love she feels for that son, who will become one of France’s greatest rulers. On the reverse, Warin, who was a key figure in the history of the medal in France, has produced one of the finest and most impressive architectural images in medallic history.

George I, King of England.

In January 1724, George I appointed Horatio Walpole (diplomat, politician, and younger brother of Sir Robert Walpole, the first British prime minister and uncle of the author, Horace) as an envoy extraordinary to the court of France. The first and second letters are formal letters introducing Horatio to that court and are signed “George R.” Walpole initially refused the post and accepted it only two months later, but several letters from the king were not delivered and lay among the Walpole family effects for many years. Two are open, for all to see; I have resisted “collectors’ curiosity” and have not broken the wax seals on the other two, which remain a probably unique instance of royal correspondence that has not been read or even opened for almost 300 years. Talk about original condition!

The main focus of my collection is architectural treatises, i.e., books on the orders. This work by Jan van der Heyden is really an exception and one of my favorite books; it deals with a fantasy house in a seventeenth-century city, an Amsterdam look-alike. With beautiful and spectacular plates, fire and fire hoses are everywhere to be seen, and you wonder if the library will be saved. Apart from the dangers of the rapid spread of fire, it gives much information about the use of, and way of life in, a typical canal house. It tells me a lot about their construction as well, very useful for today's restoration architects. Van der Heyden was multi-talented: he was superintendent of the Amsterdam fire brigade, and a skilled painter of city views, as well as an inventor.