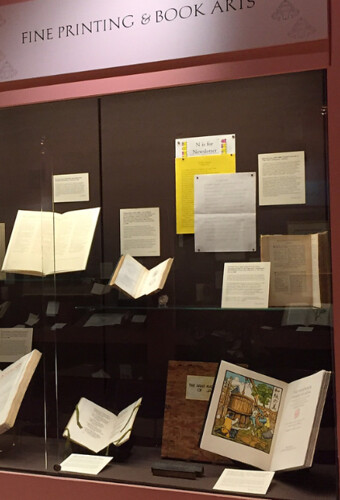 I wanted to interview Edward Gorey for N is for Newsletter, the monthly newsletter devoted to the alphabet that I had created with a friend. I knew Gorey's inventive, idiosyncratic alphabets and I wanted to know more. The book jacket for his earlier alphabet, The Glorious Nosebleed, said he lived in Barnstable, Massachusetts, so I called information and got his phone number. He answered the phone. “When would be a good time to talk?” I asked. “One a.m. on Sunday,” he answered.

And so I called at 1:00 a.m. on Sunday, May 2, 1993. We talked for 1½ hours. He was charming and forthcoming. During the conversation I learned he had a folder of unpublished alphabets. Breathlessly I asked, “Could I print one in my newsletter?” He sent me his typewritten manuscript of his then-unpublished alphabet, “The Yellow Thingummy” (which later appeared in N is for Newsletter, [vol. 1, no. 4, September 1993]). He eventually sent me two more alphabets, which I proudly printed in subsequent issues. It was a dream come true. For the handful of people who subscribed to N is for Newsletter, they had the privilege of reading the first printing of an Edward Gorey alphabet.

The Handmade Papers of Japan. Tokyo and Rutland, VT: Charles E. Tuttle, 1952. Three volumes and a portfolio of watermarks. In the original chitsu, and that in its original box. Accompanied by the woodblocks used to print the title pages of the volumes. [With:] Sidney E. Berger. The Handmade Papers of Japan. North Hills, PA: Bird & Bull Press, 2001.

The Tindale books represent the best text written on Japanese handmade paper. They contain an authoritative text, more than one hundred historic papers, and a whole volume of the best handmade papers being produced in Japan when the book was written. There are also woodblocks used to print the title pages, and a portfolio of twenty exquisite watermarks made by the Japanese hand-rubbing method.

The Berger volume is a history of the production of the Tindale book, revealing much new information, culled from the private Tindale family archives.

Hermann Zapf was my boss in 1977, when he was appointed Cary Professor of Graphic Arts at the Rochester Institute of Technology. I was curator of the Cary Graphic Arts Collection at that time. Years later he gave me this handsome account of his achievements in calligraphy, typography, and type design. He was particularly proud of a commission he received from the Morgan Library & Museum: the founding principles of the United Nations written out in French, English, Spanish, and Russian.

A List of Medals, Jettons, Tokens, &c. in Connection with Printers and the Art of Printing. London: [Privately printed], 1869. One of 100 copies printed for private circulation to collectors, curators, and numismatics dealers. [And:] Paul Dupont. Silver printer’s token of Johannes Gutenberg and Alois Senefelder, [ca. 1836], diam. 1⅜ in.

My interest in A List of Medals derives from its close association between the screw-press technology employed in letterpress printing and in the impression of commemorative images and texts onto more permanent gold, silver, and bronze medallic forms. This work also illustrates the personal collection of William Blades and his own desiderata list of printing medals, which appears in multiple, detachable sheets of different colors.

As a collector of printing-related medals, I love this book. My collection includes a portion of medals that Blades also owned, as well as an extremely rare silver token—one of his few desiderata (Plate 3Q)—for the Parisian printer and lithographer, Paul Dupont, that profiles both Gutenberg, the inventor of printing by movable type, and Senefelder, the inventor of lithography.

I'm captivated by fine and private press materials and their intersection of artistry, social and historical forces, and economic principles (sometimes disregarded). Viewed as less constrained by the pressures of commercialism, these materials allow for the preservation of culture and history that may otherwise be lost to time, often in formats of unusual beauty.

The text of the Vita di S. Chiara is printed in the Ashendene Press’s proprietary Subiaco Great Primer type, modeled after the first type of the early Renaissance printers Sweynheym and Pannartz. The book contains a facsimile of the first four pages of the original manuscript written in Florence in 1496, lost for centuries then rediscovered, and which Hornby acquired in 1918

The English Bible. Containing the Old Testament & the New Translated out of the Original Tongues by Special Command of His Majesty King James the First …., 5 vols. Hammersmith [London]: Doves Press, 1903–1905.

The Doves Bible is unquestionably the greatest production of what many people believe was the greatest of the English private presses. The result of an emotional and complex partnership between T. J. Cobden-Sanderson and Emery Walker, the Doves Press was famous for its classic, pure and almost serene typography, based on a proprietary typeface that Cobden-Sanderson eventually and famously threw into the River Thames. The first page of the Book of Genesis, with its extraordinary red initial, may well be the most famous book opening of all time. This highlight of my collection of books on books was a birthday gift from my mother.

“Voi ch' ascoltate in rime sparse il suono” is the introductory sonnet of Petrarch's canzoniere, a collection of poems, the central theme of which is his love for his muse, Laura. These passionate love songs honor Petrarch's devotion to an unattainable woman who accepted his homage, but not his intimacy. Visual pleasure demanded purchase of this book. With its sculpted covers, color engravings, and spaciously placed Bembo type on hefty rag paper? Irresistible. This was one of the offerings displayed at the Tipoteca Italiana Fondazione, visited during the Grolier Club's 1998 Iter Veneticum.

Types of the De Vinne Press: Specimens for the Use of Compositors, Proofreaders, and Publishers. New York: [Theodore L. De Vinne & Co.], 1907.

Theodore Low De Vinne (1828–1914) was a very enthusiastic Grolier Club founder who involved himself in every aspect of printing. This is my favorite De Vinne item because it reminds me of the one subject that defined his life to the end: type itself.

This 449-page specimen book describes the typefaces available at the De Vinne Press, “diligently gathered from leading foundries of this country and Europe to please the tastes of many customers.” Never one to miss an opportunity for instruction, De Vinne made it a compendium of typographic information. The volume was produced at an important moment, just before his firm was incorporated in 1908 as The De Vinne Press (which it had long been called).

It is open to Great-Primer No. 4 from the Conner Type Foundry, the face used in two large and famous De Vinne Press productions, as the page explains.

In 1967, at the Courtauld Institute, I wrote my masters dissertation on the book designs of Charles Ricketts. I was fascinated by Art Nouveau and by defining manifestations of it in Ricketts's work for commercially published books by Oscar Wilde and others in the early 1890s. In particular, for Wilde's poem The Sphinx, Ricketts made designs that were radical to the point of eccentricity.

The upper and lower covers are superficially similar but distinctively different, symbolizing the relationship of the narrator and the sphinx at the opening and the closing of the poem, respectively. The text is set in small caps throughout, and complementary sage-green and rust-red inks, as well as black, are used. The poem's couplets are placed in sometimes breathtaking amounts of space. Ricketts's illustrations are notable for their extreme Art Nouveau stylization and bizarre originality. Their iconography remains largely unexplored.

The whole, in its vellum and gold binding, with its extraordinary layouts and typography, is a true icon of the period, a strange and precious object, an epitome, in its marriage of author and artist, of form and content, of the movement known as Decadence.