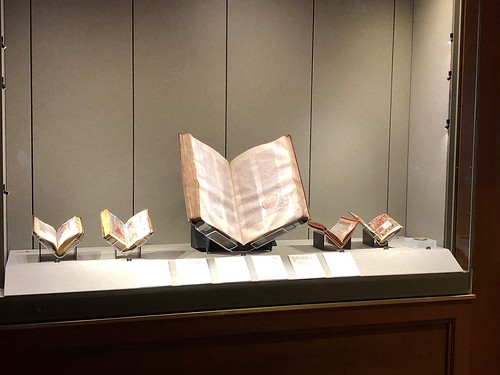 This massive one-volume manuscript of Pope St. Gregory I’s commentary on the Book of Job is the earliest French manuscript in the Club’s collections.

It is written in late Carolingian Minuscule by five scribes trained in the same scriptorium. Its illuminated initials reflect Insular influence, suggesting that it began life in a monastery founded by Irish monks. The 15-line black and red initial Q remains uncolored by polychrome wash and gilding, perhaps intentionally. The English binding, ca. 1830s, retains mounted covers from a ca. 1500 French binding. Gift of Archer M. Huntington, 1912. Cat. No. 1.1.

Book of Hours, Use of Paris. Latin & French manuscript on vellum. Paris, 1440s.

The principal artist is the Master of the Brotherhood of Ste-Catherine, and the secondary artist is perhaps the Master of Thomas Hoo. Both artists worked in the traditions of the Boucicault Master and the Bedford Master. The English binding, by Revière & Son, 1889, is black goatskin gilt-tooled in a Grolieresque design. Gift of Daniel B. Fearing, 1908. Cat. No. 1.2.

Local feasts, helping to localize this manuscript’s origins, honor saints particular to northern France, including Saints Eleutherius and Omer. Lille is within the Diocese of Tournai.

The four major illuminations are by the Master of the Claremont Hours, more than twenty of whose Books of Hours have been identified thus far. Our manuscript retains its original binding of worn brown velvet over wooden boards; it was rebacked in brown goatskin in the 19th century. Gift of Daniel B. Fearing, 1905. Cat. No. 1.3.

The twenty-two miniatures in the Calendar are in the style of Robert Boyvin, and the fifteen full-page miniatures are by a follower of the Master of Petrarch’s Triumphs.

The major illumination of the Virgin and Child with St. Joseph and a choir of Angels depicts the donors, a married couple, for whom the manuscript was created. Their armorials are of the Rouennais families Du Four and Deschamps. Our manuscript is bound in somewhat worn older red velvet, with 19th-century endpapers. Gift of David Wolfe Bruce, 1894. Cat. No. 1.4.

Nearly a century after the invention of printing from movable type in the West, here is a luxury manuscript clearly created to imitate books printed in roman type. It is strongly influenced by the Italianate innovations in France of Geoffroy Tory.

The two-page illumination of the Annunciation is directly inspired by Tory’s 1527 and 1529–30 Books of Hours. All the stunning illuminations are in superb Mannerist style. The book opens with the illuminated armorials of the Comte de Rochechouart and the Castel-Lodève. Our manuscript is bound in 18th-century gilt-tooled French green goatskin. Gift of the children of Waters S. Davis, 1940. Cat. No. 1.5.

Gilt bronze portrait medallion of the 15th-century miniaturist Jean Fouquet (1420–1481), struck as part of a series to honor French artists across the centuries.

The obverse bears a bust portrait of Fouquet in right profile on a semé of fleurs-de-lis. The surrounding legend identifies him as a celebrated painter of miniatures. The blank reverse is repoussé. Cat. No. 10.1.