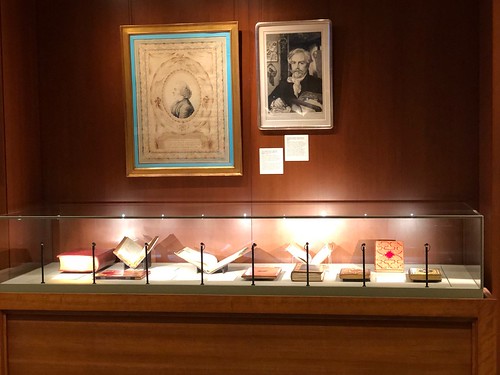 This is a memorial portrait of Roland de La Platière, French revolutionary and leader of the Girondist party, who died in the same year. Bernard was a celebrated portraitist in calligraphy, whose subjects included Louis XVI and Marie Antoinette, Jean-Jacques Rousseau, and Napoleon.

The portrait and its swirling décor, along with the inscriptions, are executed in pen and ink on paper, with watercolor wash. Calligraphic and micrographic portraits have enjoyed great acclaim as artistic genres, and this is quite an elaborate example of the former technique. Gift of Philip Hofer, 1958. Lasting Impressions, p. 95.

Bracquemond depicts Goncourt among his treasures. At his left front is a portfolio of prints by his younger brother, Jules. Edmond created the Académie Goncourt to honor Jules and the Prix Goncourt in his brother’s memory. The prize continues to be awarded each December.

This is the final version of this masterpiece, the eighth of eight states. It enjoys an unbroken provenance: from the artist to the subject, who gave it to Theodore Child, who bequeathed it to his executor, George A. Lucas, who donated it to the Club, with Samuel Putnam Avery as the intermediary. Gift of George A. Lucas, 1893. Cat. No. 11.14.

The library of the Council of State, consisting of some 10,000 volumes, was transferred to Fontainebleau in 1807 under Napoleon’s orders. Our copy is bound in somewhat later Parisian red goatskin, with the arms of Louis XVIII, whose reign began in 1815.

The binding, in the style of the Bozerian brothers, is unsigned. It is possibly the work of Lefèbvre, nephew of the elder Bozerian, Jean-Claude (Bozerian l’aîné); Lefèbvre had inherited his uncles’ suite of binding tools. Purchased on the trust fund of Lathrop Colgate Harper. Cat. No. 7.2.

De Cotte’s library was particularly strong in French literature and achieved some of the highest prices to date at its auction in April 1804. Our copy is bound in contemporary Parisian crushed citron goatskin.

This copy is printed on blue-tinted paper, is completely priced throughout in pen and ink, and contains two versions of the title-page. One version is anonymous, the other not; the former includes the original price (2 francs, 50 centimes), so this leaf was perhaps a front wrapper. Gift of Samuel Putnam Avery. Cat. No. 7.3.

Giroux was a bookseller who claimed to be a bookbinder but in reality commissioned work from shops willing to affix his name to their creations. Antoine Bauzonnet is known to have declined to do so. This binding is attributed to René and Adolfe Simier (Simier père et fils), though Joseph Thouvenin produced very similar work. Gift of Samuel Putnam Avery, 1899. Cat. No. 7.8.

Flourens was a prominent physician and physiologist who taught at the Collège de France: Professor of Anatomy (1833) and Professor of Natural History (1855). He was a member of the Académie française and Grand Officier of the Légion d’Honneur.

This is his autograph record of his extensive professional library, consisting of works in multiple scientific categories and disciplines. Languages range from French and German to Latin and English. Flourens employed a folio ledger volume that he purchased from a stationer in the immediate neighborhood of the Collège de France. Purchased on the Mary Young Fund, 2016. Cat. No. 7.12.

Popelin presented this copy, printed on papier de chine and in a special binding, to the art critic Philippe Burty. It is extra-illustrated with original drawings and engravings, bound in and loose, as well as proofs of decorative printed elements.

The terra cotta crushed goatskin is heightened with thinly skived maroon goatskin inlays, the corner angles stamped with the monogram bvrty. The central roundel is porcelain with a portrait of a Frankish “Long-haired King” executed in gold on black sgraffito, with Popelin’s monogram. The donor acquired this copy at the 1891 auction of Burty’s library. Gift of Samuel Putnam Avery. Cat. No. 7.13.

Uzanne created his own set of the first two years of his renamed literary periodical, adding an extraordinary range of original art, proofs, illustrations, autograph letters, manuscripts, and ephemera to the printed issues. Vieuxmaire and Meunier created the elaborate bindings.

Nine volumes emerged from this process, each uniformly bound in brown goatskin with black goatskin inlays, tooled in gold, silver, and blind. Scribal motifs of crossed quills in silver and gold are paired with open books and owls in gold; the red goatskin doublures are especially striking. The Club’s donor acquired the set from Uzanne. Gift of Samuel Putnam Avery, 1897. Cat. No. 7.16.

Our Founders sought to improve the quality of American printing by establishing a publishing program, and thus this edition of the Philobiblon as an early instance. They also raised the quality of bookbinding by bringing master craftsmen from Paris to New York.

The founding president of the Club Bindery was Edwin B. Holden, and this is his set of the Philobiblon, bound by Léon Maillard in 1900. Each of the three volumes is in crushed goatskin tooled in an elaborate historicizing style, with calf or goatskin inlays; endleaves are comparably elaborate, including vellum. Housed in slipcases, they are as fresh as the day they left the binding bench. Bequest of Marion Holden, 1980. Cat. No. 7.19.