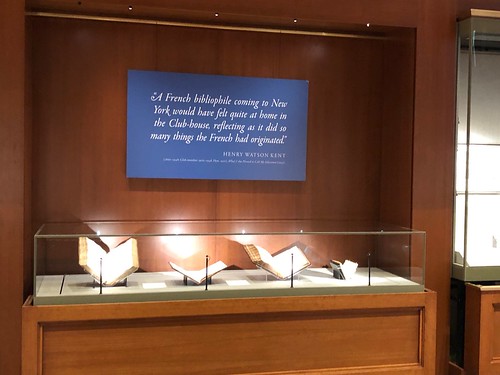 Homiliae LXX in Evangelium Matthei. [Strasbourg: Johannes Mentelin, not after 1466].

The earliest printed book in the David Wolfe Bruce gift is this volume of St. John Chrysostom’s homilies on St. Matthew’s Gospel.

Mentelin was an Alsatian from Sélestat who was granted Strasbourg citizenship in 1447. He became the first printer in this free city of the Holy Roman Empire at about the end of the 1450s. His daughters married two subsequent Strasbourg printers, Adolf Rusch and Martin Schott. Our copy, rubricated throughout in red and blue soon after the completion of printing, is in a 19th-century German binding. Gift of David Wolfe Bruce, 1894. Cat. No. 2.1.

St. Augustine’s “Art of Preaching” is a section of his De doctrina christiana, parts of which Mentelin is known to have printed. It is likely copied from the Mainz: Fust & Schoeffer, 1467 edition, reprinting the same introductory material and index by Stephan Hoest.

A copy formerly in Leipzig carried a note in Latin dating the completion of rubrication to the last day of August in 1469. Whereas the complete rubrication of our copy is contemporary work, its present binding is 19th-century German. Gift of David Wolfe Bruce, 1894. Cat. No. 2.2.

Ockham, the English Franciscan who spent most of his life on the Continent, was a major scholastic philosopher of the High Middle Ages. Badius dedicates his edition to the famous Johannes Trithemius, abbot of Sponheim.

Trechsel, one of the German émigré printers in Lyon, would be succeeded in the 16th century by his sons Melchior and Gaspard. Our copy is in a contemporary binding in the German style of blind-tooled brown calf over wooden boards; the spine compartments carry a large oak leaf in relief. It belonged at an early date to the Augustinians of Munich. Gift of David Wolfe Bruce, 1894. Cat. No. 2.3.

Book of Hours, Use of Paris

Modeled on its manuscript forebears, this printed edition is rubricated throughout in red and blue with gold highlights. Each page is set within an engraved border, and there are 19 full-page engraved miniature illustrations.

Pigouchet was a printer and engraver who specialized in books of hours, and the bookseller Vostre was a famous purveyor of such works. Our copy is in a slightly later binding of black crushed goatskin blind-tooled in a panel design with corner fleurons. Gift of David Wolfe Bruce, 1894. Cat. No. 2.4.