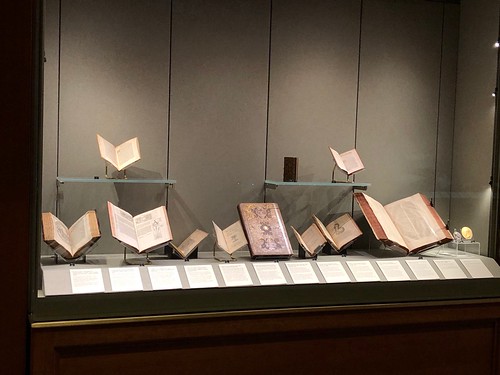 The first printed edition of Richard’s “Love of Books” appeared in Cologne in 1473, and this is the earliest edition among the Club’s extensive holdings of this seminal work. Badius dedicates his edition to the royal confessor Bishop Laurentius Burellus, O.Carm.

Our copy is rubricated throughout in red and blue in the French manner and is bound in 16th/17th-century gold-tooled French vellum. Acquired at auction in 1967. Cat. No. 3.1.

Reisch’s humanist friends included Erasmus. His Margarita philosophica is his study of all things knowable. This is the second edition; the first edition appeared in 1503, and more than 20 editions, including piracies, were published up to 1517.

Reisch enhanced the usefulness of his work through its many woodcut illustrations. Our copy, rubricated throughout in red and blue, is bound in contemporary blind-tooled German dark-brown calf over wooden boards, with thumb-tabs to mark sections. The Benedictines of Huysburg owned this copy at an early date. Gift of David Wolfe Bruce, 1894. Cat. No. 3.2.

In the spring of 1501, Aldus Manutius began a revolution in the history of the book with his Portable Library, the libelli portatiles or enchiridia. Adopting a small octavo format from humanistic literary manuscripts in the library of Bernardo Bembo, he published works printed in a cursive typefont that mimicked the humanist’s chancery handwriting, and issued plain texts, without commentary. Other printers quickly saw the commercial merits of this revolution, and began to issue their own editions, some pirated from the Aldine editions and some not, but all of them slavishly imitating the three crucial elements of Aldus’ invention: plain text, italic type, and handy format.

First among these pirates were emigre printers in Lyon, many of them Italian, located in that ancient center of trade, safely removed from the sanctions of Venetian, and later papal, protection issued exclusively to Aldus. They operated anonymously for the best part of a decade, eventually identifying themselves in their colophons. See also Clemons & Fletcher, Aldus Manutius, pp. 141–169 (“Flattery and Forgery”).

Two early examples follow, and a third one, famously if incidentally featuring Jean Grolier, is in the section devoted to him (see Cat. No. 4.1).

Tory returned home from Italy inspired by the artistic and technical advances of the Renaissance. This work embodies his successful campaign to replace gothic typography in France with roman fonts; to reform French orthography; and to encourage a much lighter style in book illustrations, in fine-detailed metalcuts.

The binding on this copy is dark-brown goatskin, New York City work from as recently as 1975, replacing a deteriorated 18th-century binding. It is gilt-stamped with a 1909 reproduction of Tory’s pot cassé (broken vase) design, found on 18 bindings from his lifetime. Purchased by order of the Council, 1889. Cat. No. 3.5.

Badius, after teaching Greek in Lyon while also working as an editor for Jean de Tournes, became a famous scholar-printer in Paris, producing about a thousand editions over decades of work.

He concentrated much of his efforts on producing corrected editions of classical works, often with his own commentaries, for students and scholars. His famous printer’s device of The Ascensian Press, deemed an accurate picture of a contemporary printing establishment, is regularly reproduced in histories of printing. Purchased in Amsterdam, 1926. Cat. No. 3.6.

Robert Estienne issued pamphlet-length editions of shorter classical works, printing them in large sizes of roman type, for clarity, with accents for correct pronunciation. Intended for use by young schoolboys, they survive, predictably, in very small numbers, most having been read to pieces.

The Club has three short works in this group, two by Cicero and one by Sallust; the Sallust is otherwise unrecorded. Estienne published them in April and May 1533 and in March 1534. These pristine copies ― clearly never at the mercy of young boys ― were once owned by Pierce Butler, sometime librarian of The Newberry Library, and were acquired by the Club in the mid-20th century. Cat. No. 3.7.

Cassius Dio wrote his thousand-year history of Rome in eighty books; Robert Estienne’s edition contains the books known in his era, 23 and 36 through 58.

This royal folio in brown calf was bound by the Geneva Kings’ Binder, an atelier of French Huguenot émigrés who created bindings for Henri III and Henri IV. The splendid gilt and polychrome design with grotesque humanoid masks, along with the painted, gilded, and goffered edges, reflect the finest French work of the era. (The central crest of five ostrich feathers is a 19th-century English addition.) Gift of Samuel Putnam Avery. Cat. No. 3.9.

The Edict of Chateaubriand fixed the laws governing permission to publish, censure, monitor, and ban books throughout France, from this date until the end of the Ancien Régime in 1789. Its stated purpose was to ban the import of Lutheran and heretical publications into France from Geneva.

This collective volume of five works, all on legal themes published in Paris between August and October 1551, was assembled in Bourges in 1552 by a German jurist, Michael Folkhamer, a Bavarian native. It is bound in contemporary French vellum. Purchased on the Mary Young Fund, 2017.  Cat. No. 3.10.

Jean de Tournes published extensively in Latin, French, and Italian, issuing classical and contemporary authors, and specialized in the production of illustrated books. He founded a dynasty of printer-publishers that lasted into the 20th century.

Bernard Salomon created the many illustrations in this work and was known as “Petit Bernard” for the artistic intricacy of his miniatures. The book is ruled in red and bound in 18th-century French red goatskin. Gift of Samuel Putnam Avery. Cat. No. 3.11.

Guillaume Rouille or Rouillé was competent in Latin, French, and Italian, and published in all three languages. His greatest fame derives from his emblem books, especially those by Andrea Alciati. This is a very uncommon issue of Ariosto, among the many editions he printed between 1550 and 1580.

Bound in contemporary Lyonese brown calf, our copy is gilt-stamped with an interlaced binding die on both covers, with a black enamel border; the spine carries the repeated device for steadfastness, and the goffering of the edges features a crescent. Gift of Samuel Putnam Avery. Cat. No. 3.12.

Henri Estienne was the greatest member of this famous family of scholar-printers. His learned editions of Greek and Roman classics were highly regarded, but they also caused him substantial financial worry.

Henri attended the Frankfurt Fair in 1574, seeking new customers for his publications. While the Frankfurt Book Fair continues to this day, the fair Henri attended was a universal emporium of goods of all kinds, from exotic spices to sturdy animals. He was received royally, and this is his encomium to the Fair. Gift of Leonard L. Mackell. Cat. No. 3.13.

Henri Estienne edited this great edition; it includes the Latin version by Jean de Serres, which he was constrained to correct. To this day, Plato is cited by Henri’s numbering system. The present edition and his Greek Thesaurus were major contributors both to his fame and to his financial woes.

It was while work continued on these publications that Henri saw the 1574 Frankfurt Fair as a feasible source of fresh moral and practical support. The three books of this edition are bound in two volumes, in German pigskin over wooden boards, probably dating from the last decades of the 16th century. Gift of Leonard L. Mackell. Cat. No. 3.14.

Bronze portrait medallion of the founder of the Estienne printing dynasty in right profile, engraved by Paul Joseph Raymond Gayrard.
The reverse carries a woman symbolic of France, crowning a printing press with a laurel wreath. Gift of Samuel Putnam Avery, before 1903. Cat. No. 10.3.

Gilt bronze portrait bust medallion of the most famous member of the Estienne printing dynast.