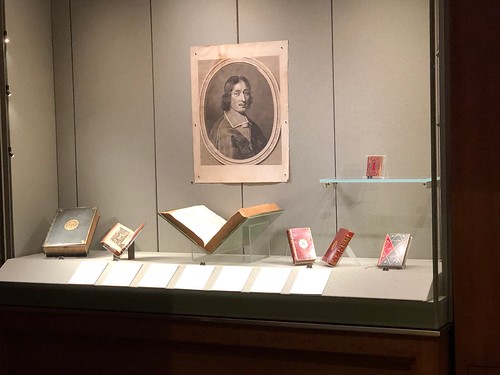 This engraved portrait is very similar to the reversed image of Pierre du Cambout, allegedly as Abbot of St.-Pierre d’Abbeville, painted by Nanteuil before 1661. The caption describes Pierre as Bishop of Orléans, his prelacy from 1666 to his death, in 1706.

This elephant folio is the largest 17th-century line-engraved print in the Club’s collection, and only one other copy seems to be recorded, in the Royal Collection Trust. Gift of Edward G. Kennedy, 1930. Cat. No. 11.7.

Pierre’s nephew, Henri-Charles was Bishop of Metz and great-grandson of Pierre Séguier, sometime Chancellor of France. He commissioned the compilation of this royal folio catalogue; our copy is bound in contemporary green-stained French vellum, with a heavily gilt spine.

Henri-Charles had inherited his great-grandfather’s Greek manuscripts, and added to the collection. He donated the manuscripts to the great Benedictine Abbey of Saint-Germain des Prés, and some of them survive in the Bibliothèque nationale de France. Purchased on the trust fund of Lathrop Colgate Harper. Cat. No. 6.2.

The post-mortem inventory of Count Hoym’s property in Paris, including his very extensive library, was overseen by his faithful business manager, Isaac Milsonneau. The library was one of the great bibliophile collections of the past half-millennium.

The manuscript is bound in French blue goatskin, a rare leather listed among the movable goods. It is tooled in gilt with his arms and the insignia of the crowned White Eagle of Poland, reflecting his long service to the King of Poland, Elector of Saxony. Purchased in 2012. Cat. No. 6.4.

This parody of the reports of the Académie française celebrates the hawkers of printed materials ― books, broadsides, pamphlets, and ephemera ― who brought printed matter to the French countryside. Some of their offerings were high-minded, and some were scurrilous, so the colporteurs were alternately praised by the populace and condemned by the authorities.

Charles-Nicolas Cochin engraved the illustrations that appear throughout the book. This example is bound in contemporary French speckled brown calf, with a gilt spine and red edges. Purchased in 1996. Cat. No. 6.6.

This set of volumes from Madame de Pompadour’s library, on a somewhat abstruse topic ― a theory of colors opposed to Sir Isaac Newton’s ― is reflective of her excellent education, advanced intelligence, and taste.

Her books were inherited by her brother, the Marquis de Marigny, who sold them at auction in 1765. The two volumes are bound in contemporary Parisian polished red goatskin, with her armorials in gilt on all four covers. Purchased in 2003. Cat. No. 6.7.

This miniature book is a good representative of the elegant little editions of classical authors published by Barbou. Its binding is the work of Stikeman & Co., of New York City, from the end of the 19th or the turn of the 20th century.

The red goatskin binding is in an historizing interlace style, with blue and gilt inlays. The extraordinary doublures are of ivory tooled in gold. The donor reported in a 1903 private publication that he had lent Henry Stikeman a 16th-century binding for Thomas Mahieu to serve as the model. Gift of Samuel Putnam Avery. Cat. No. 6.8.

The quantity 4 repeatedly dominates this very clever book, with its four-color printing, its four-color binding, and the gilt numerals 4–40–400–4000 on the back cover. The text is printed in blue, yellow, brown, and red, imitating contemporary porcelain ware.

Its precocious binding is the work of Odette Lamiral, who worked in Amiens in the middle decades of the 19th century. What is likely brown sheep is overlaid with diamond-shaped and triangular patterns of red, green, purple, and blue calf. Gift of Samuel Putnam Avery, 1889. Cat. No. 6.9. 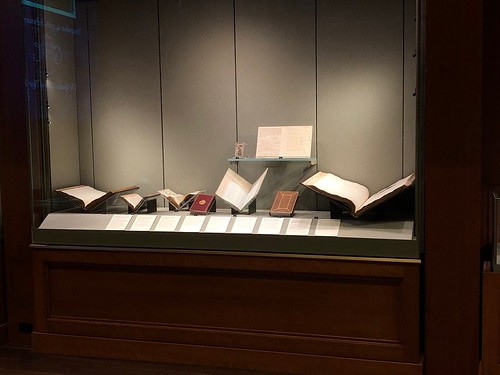 The post-mortem inventory of Pompadour’s library was ordered by her former librarian. This manuscript is more extensive than the Hérissants’ 1765 catalogue; the 19th-century bibliophile Baron Jérôme Pichon believed it was prepared independently of that printed catalogue.

The royal folio is bound in contemporary Parisian mottled brown calf, with gilt spine. Owned in the early 19th century by Charles de Goesin-Disbecq, the volume has a bizarre 20th-century provenance. Free French soldiers of General Leclerc’s Second Armored Division liberated it from Hitler’s alpine retreat at Berchtesgaden on 4 May 1945. Purchased in 1978. Cat. No. 6.15.

The library described in this catalogue was auctioned on 12 February 1765. Pompadour’s brother, who had inherited it, sold the library in the year following her death. Bridard de La Garde’s manuscript inventory contains many titles not listed here.

The printed catalogue, in period green boards rebacked in dark-brown goatskin, is priced throughout in a contemporary hand. Purchased on the trust fund of Lathrop Colgate Harper. Cat. No. 6.11.

Fournier le Jeune undertook to write and produce a four-volume study of typefounding, printing, and printers, of which he completed these first two volumes. After many rejections, he persuaded the bookseller Barbou to publish the work.

The first volume treats technical aspects of typography and printing; the second contains more than a hundred fonts of type and decorative elements; the unrealized third and fourth were to explain practical issues of printing and lives of the great printers, respectively. The set is uniformly bound in contemporary Parisian brown calf. Gift of David W. Bruce, 1894. Cat. No. 6.12.

This compendium of works on religion by various authors was edited and mostly written by Voltaire himself, including works attributed to others. Like this one-volume first edition, a second “Leipsik” edition, in two volumes, also bore a false imprint, and was actually issued in Amsterdam.

Our copy is bound in contemporary Parisian red goatskin, gilt with the armorials of Marie Antoinette on both covers. Gift of Samuel Putnam Avery. Cat. No. 6.13.

Questionnaire regarding the library of the Duc de La Vallière. Manuscript on paper. Paris, 28 May 1777.

The abbé Desaunays writes, likely on behalf of Louis XV, to the abbé Rive, La Vallière’s librarian, inquiring about the finest copies, the most important works, and the value of the collection. Despite Rive’s detailed reply, no sale resulted, and the library was auctioned off after the duke’s death.

In the 18th and 19th centuries, the manuscript was in two English collections, Richard Heber’s and Sir Thomas Phillipps’. It is bound in Middle Hill boards, covered in bright green paper, with endpapers watermarked W Brookman 1835. Acquired at auction in 1966. Cat. No. 6.17.

Nearly four years after the duke’s death, his library was sold in two sessions, the first realizing very high prices. The second was purchased privately by the future Charles X, and passed to the Bibliothèque de l’Arsenal.

The Club preserves two sets of these volumes, one of which is completely priced in manuscript by Michael Wodhull. The other is the present set, on blue-tinted paper, in 12 volumes uniformly bound in contemporary thinly skived sowhide, a rare and fragile material. Gift of Lucius Wilmerding. Cat. No. 6.18.

The Prussian Royal Academy of Science and Literature sponsored this yearbook with an eye to wide European distribution. Frederick the Great’s court was Francophone, as were the courts of the many Germanies of the era. The preferred language is not its only French feature.

The miniature is bound in French style in white silk, with polychrome embroidery featuring the armorials of Louis XVI, stands of arms, and a knight in silver armor. Gift of Samuel Putnam Avery, Jr. Cat. No. 6.20.

Autograph letter signed, concerning the purchase of books. Manuscript on paper. Monticello, 26 May 1795.

Jefferson explains to the Parisian bookseller that a shipment of books from Paris had arrived, after thirteen months, badly water-damaged. He makes suggestions about safe methods of packing the replacements for ocean shipment, and orders additional books.

This letter was enclosed in a letter to James Madison in Paris, expecting Madison to make Froullé’s acquaintance in the course of delivering it. Jefferson was unaware that the bookseller had been executed more than a year earlier, during the Terror. Gift of William Bradhurst Osgood Field, 1932. Cat. No. 6.24.

This royal folio is noteworthy for its typography and illustrations. It is an early instance of the Didot family’s foray into so-called Modern Style typography, marked by verticality and strongly differentiated thick and thin elements in the letters. The neoclassical headpieces are the work of the architect Charles Percier.