Treasurer of France, Treasurer and Receiver-General of French forces in the Duchy of Milan, patron of the book arts, “Prince of Bibliophiles” 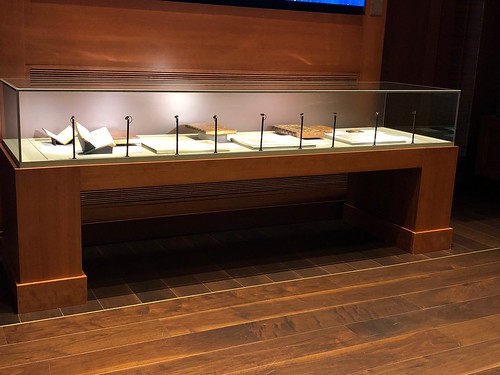 Jean Grolier’s name, in the Latin form Janus Grolerius, appears in print for the first time in this pseudo-Aldine, edited by Grolier’s humanist tutor in Paris, Gaspare Mazzoli da Argile. A professor at the University of Bologna, he likely taught Grolier his fine chancery hand. Balthazar, a Venetian émigré, was the first Lyonese printer to pirate Aldus’s revolutionary octavos.

The publication might have coincided with Grolier’s 19th birthday. (Royal secretaries were appointed at 18 or 19 years of age.) Our copy is in a contemporary Roman binding, and it once belonged to the great English bibliophile Richard Heber. Gift of Samuel Putnam Avery, 1890. Cat. No. 4.1.

Jean Grolier developed his first library during his initial deployment as Treasurer and Receiver-General of French forces in the Duchy of Milan (September 1509–November 1513). Twelve Aldine octavo editions are known, three of them surviving in contemporary calf bindings. This first Aldine edition of Homer in Greek is one of that dozen, and carries Grolier’s early use of his armorials and “aeque difficulter” device.

Bound in Paris for Jean Grolier by Jean Picard (Jean Leschère dit Picard), the Entrelac Binder, in brown calf, gold-tooled in the interlace style for which he is famous. The volume has been rebacked, when the spine received additional tooling; early paper (watermarked ca. 1539) has been employed as endleaves.

Grolier’s ownership inscription io. grolierii et amicorvm is on the front cover and his “portio mea …” motto on the back. Picard created this binding between June 1540 and September 1547. Gift of Seth Sprague Terry, 1935. Cat. No. 4.3.

Bound in Paris for Jean Grolier by the Cupid’s Bow Binder, ca. 1550–1555, in gold-tooled brown calf. The binding tool that provides this binder’s sobriquet is repeatedly employed around the central cartouche bearing the title. The 17th-century replacement spine carries a semé of fleurs-de-lis; the endleaves are early paper (watermarked ca. 1533).

Grolier’s ownership inscription io. grolierii et amicorvm is on the front cover and his “portio mea …” motto on the back. The best-preserved Grolier binding in the Club’s holdings, its extensive provenance includes Charles, Earl Spencer. Purchased from the Estate of Lucius Wilmerding, 1951. Cat. No. 4.4.

Bound in Paris for Jean Grolier by a royal binder (Claude Piques or Gommar Estienne) or the Cupid’s Bow Binder, ca. 1550s–1560s, in gold-tooled dark-brown calf. Only the panels laid down on front and back covers are original. The present underlying binding is Parisian, ca. 1860s, when the enamel infills were also applied over hatched small tools.

Grolier’s ownership inscription io. grolierii et amicorvm is on the front cover and his “portio mea …” motto on the back. The book has a very extensive provenance, including Jacques-Auguste de Thou and Baron Achille Seillièire. Gift of Meredith Hare, daughter of Dean Sage, 1929. Cat. No. 4.5.

Bound in Parisian gold-tooled citron goatskin for Jean Grolier by Jean Picard. Grolier’s ownership inscription io. grolierii et amicorvm is on the front cover and his “portio mea …” motto on the back. The volume has been rebacked (ca. 1900).

This luxurious dedication copy for Jean Grolier features gold and red illuminated dolphin and anchor devices and major initials. It served secondarily as a sample in the Aldine shop in Paris, managed by Picard (June 1540 to September 1547) under Grolier’s overall supervision. From the collection of G. Scott Clemons. Cat. No. 4.6.

Appointment of Jean Grolier as Treasurer of France and Receiver-General of French Forces in the Duchy of Milan. Manuscript document, signed, on vellum. Blois, 15 September 1509 (12 Louis XII).

The king appoints Jean Grolier to succeed his recently deceased father, Étienne. Jean Grolier, already a royal secretary, was about 20 years of age.

The document, signed by the king and two secretaries, requires Jean Grolier to countersign it as his receipt of funds. The document is sliced neatly across the bottom, suggesting that his signature may have been removed as a souvenir. An empty slit is a witness to the vanished seal and its attachment. Gift of Otto Schäfer, on the occasion of the Club’s Centenary, 1984. Cat. No. 4.7.

The Treasurers of France. Payment order to Berenguier Berenguier. Manuscript document, signed by Jean Grolier, on vellum. Paris, 22 May 1550.

Berenguier, the Receiver-General of Finances in Guyenne, is instructed to settle a payment of 25 livres Tournois upon Pierre Piques, described as an eleve (a student). The order is approved by Jean Grolier, at this time about 60 years of age.

The document is signed by Grolier as Treasurer of France, in a large secretary-hand gothic script, his customary official, vernacular signature. It is striking that the payee is a young person with the family name of Piques, since Claude Piques was one of Grolier’s binders. Permanent loan of William M. Clearwater, 1921, converted to bequest, 1976. Cat. No. 4.8.

Boullene, the Receiver-General of Finances in Outre-Seine et Yonne, hereby acknowledges receipt of payment from Withal De Prat of Soissons. The order is approved by Jean Grolier, at this time about 73 years of age (he would die, aged 75, on 22 October 1565).

The document is signed by Grolier as Treasurer of France, in a secretary-hand gothic script, his customary official, vernacular signature. It is endorsed by the Comptroller-General of Finances, De Boysse. Acquired at auction on funds provided by Lucius Wilmerding, 1938. Cat. No. 4.9.

The portrait of Grolier is imaginary, because no contemporary image is known to exist. At his death, his daughters buried him in a tomb near the main altar in Saint-Germain des Prés, to which they attached a portrait of their father. His tomb was moved later to a side chapel and destroyed in the 18th century.

The Club commissioned this medallion to commemorate a bibliophilic visit to France and Germany in May 1970. One silver medal was also struck. The reverse contains an imaginary portrait of Johann Gutenberg. Cat. No. 10.2.