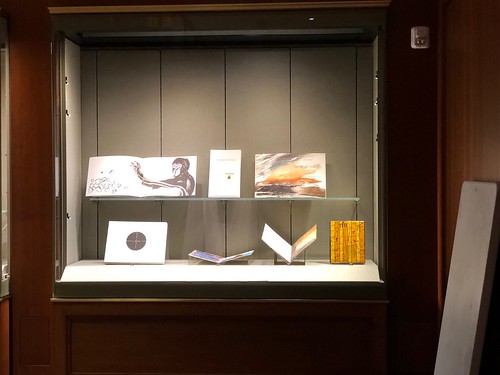 These works by the Francophone poet, scholar, and statesman who served as the first president of Senegal were originally published in Paris in 1990 by Du Seuil. The present bibliophile edition of “Prière du paix” and “Elégie pour Martin Luther King” was issued during the centenary of Senghor’s birth.

The type is handset 24-point Garamond, printed letterpress by François Huin at L’Hay-les-Roses. Our copy is number 20 of 130 copies, printed on Vélin d’Arches, and signed by the artist. Gift of Elizabeth A. R. Brown, 2017. Cat. No. 9.2.

Jabès’s greatest literary fame dates from his arrival in Paris in 1957, driven into exile from his native Egypt by the Suez War. The texts translated here, excerpted from The Book of Questions: Yaël, Elya, Aely, form the basis of this Franco-American artist’s book.

The type is set in Palatino and printed letterpress by Bradley Hutchinson; the four lithographs have been printed by Maurice Sanchez at Derrière l’Étoile Studio, and colored in pochoir by the artist. Our copy is number 45 of 50 copies, printed on Rives BFK paper. A stone from the Negev Desert, affixed to a page in the frontmatter, is visible through a cutout. Gift of Ed Colker. Cat. No. 9.4.

This folio contains the lyrics to eleven chansons by Brel. In French bibliophile fashion, it is issued unsewn in gathered signatures, within a paper wrapper printed in calligraphy, and enclosed in a clothbound chemise and slipcase covered in light-brown linen.

The book is composed in 24-point Nicolas Cochin and printed letterpress on Vélin d’Arches by Pascal Durier at Issy-les-Molineaux. Our copy is number 20 of 120 copies. Gift of Elizabeth A. R. Brown, 2017. Cat. No. 9.5.

This companion volume includes the catalogue to the most extensive public exhibition in the Club’s history. The text was printed letterpress in Garamond on Arches Expression by the Imprimerie Nationale at Ivry sur Seine, the illustrations were printed in Connecticut, and the regular edition was sewn and clothbound in Massachusetts.

The Parisian designer-bookbinder Florent Rousseau created two examples of this exceptional binding in black calf, with bands in two shades of gold featuring certain of the Imprimerie Nationale’s many exotic typefaces. One copy was auctioned at the Club’s January 2012 annual meeting, and this is the Club’s archival copy. Cat. No. 9.6.