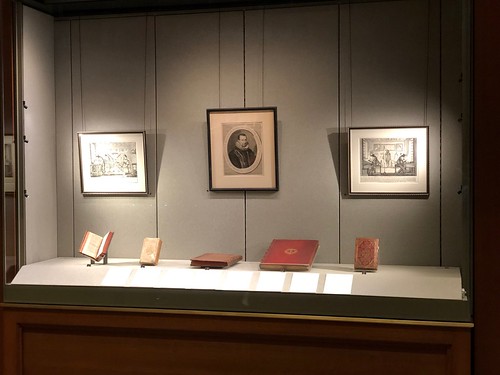 Portrait of Jacques-Auguste de Thou. Paris, 1617.

De Thou died on 7 May 1617, so this is likely to be a memorial engraving, etched after a portrait by Philippe de Champaigne.

One of the greatest bibliophiles of his era, de Thou is praised here for his career as statesman, including his role as president of the Parlement de Paris. He is depicted handsomely garbed in a ruff collar and fur-fronted tunic. Gift of Samuel Putnam Avery, after 1890. Cat. No. 11.1.

Naudé was a physician and bibliographer, and his abiding fame derives from his work in the world of books. He was the librarian to four cardinals: Bagui, Barberini, Richelieu, and Mazarin.

This is the first comprehensive and systematic guide to forming a library, providing guidelines to selecting books, obtaining them, and arranging them in the most attractive manner. It is still a useful guide. Its first English version is a translation by John Evelyn. Our copy is bound in early French calf, tooled in gilt. Purchased on the trust fund of Lathrop Colgate Harper. Cat. No. 5.1.

“How One Prints from Etching Plates” depicts Bosse’s studio, from the master checking and cleaning the copper plate, to the apprentice inking the next plate to be struck, to the ink-stained wretch straining at the press to make a clean impression.

The working part of the shop is a modest space, with one window, the room dominated by the press. Drying prints hang from cords along the rear wall. Gift of Samuel Putnam Avery, 1892. Cat. No. 11.2.

“Engravers Using Fresh Water, the Burin, and Acid” is a serene setting of the sales room of Bosse’s atelier. The extensive caption is a concise description of the process of making prints. It would lead to Bosse’s book-length manual on engraving, published in 1645.

The sales room is a much handsomer space, flanked with windows letting in ample light to encourage the customers in making their selections. Two engravers are at work engraving copper plates, in apparent silence. Large prints hang framed to enhance their appeal. Gift of Samuel Putnam Avery, 1892. Cat. No. 11.3.

Biography was a prominent subject in Jacques-Auguste de Thou’s library, fittingly so for de Thou the historian-statesman. This particular biography is bound in French vellum, modestly tooled in gilt with his arms block as a bachelor.

Most of his books were bound for him over the decades, with his armorials and monograms (inherited books from Jean Grolier’s library were spared). The first design bore his arms as a bachelor and his iadt monogram on the spine. The second design acknowledged his 1587 marriage to Marie Barbançon de Cany (d. 1601), and the third design reflected his 1602 marriage to Gasparde de La Chastre. Gift of Samuel Putnam Avery. Cat. No. 5.10.

Barbaro’s edition of Themistius on Aristotle is one of only two works published in the lifetime of the Venetian humanist, first issued in 1481. This example comes from the library of the great bibliophile and statesman Jean-Baptiste Colbert.

The Parisian binding of plain Jansenist brown calf, with red edges, is modest by Colbert’s bibliophilic standards, though a good part of his library was bound in this fashion. (The original spine had perished before this copy entered the Club’s library.) Étienne Baluze, his librarian, has written the customary ownership notice Bibliothecae Colbertinae on the title-page. Colbert’s arms block is the earliest version of his armorials. Gift of Leonard L. Mackell. Cat. No. 5.6.

This edition of Terence’s plays is representative of the major classical authors published during the early period of the Imprimerie Royale. Our example comes from the library of the great bibliophile and statesman Jean-Baptiste Colbert; its binding is emblematic of the aesthetic glories of his collection. The Parisian binding of red goatskin carries Colbert’s arms block in its final version, with the collars & pendants of the royal orders of St. Michael and the Holy Spirit.

The royal library designated 1,820 of their 4,101 red goatskins for Colbert’s personal library between 1668 and 1683. Additionally, this binding cannot be earlier than 1668 because the present version of the armorials and coroneted-JBC cypher were engraved by Simon Thomassin père in that year. Gift of Philip Hofer in memory of Ruth S. Granniss. Cat. No. 5.7.

A pious work offering guidance to living a daily life in accord with the principles of Christianity, the book is extensively illustrated with full-page religious scenes, by four French engravers. The anonymous author may have been a man or woman in religious life.

Rocolet was a publisher and bookseller, who engaged many master craftsmen to create very accomplished bindings, all anonymous and all generically assigned to the Rocolet atelier. At least six binders have been proposed, on the basis of small binding tools, which tend to be very similar and differ only slightly. Gift of Samuel Putnam Avery. Cat. No. 5.5. 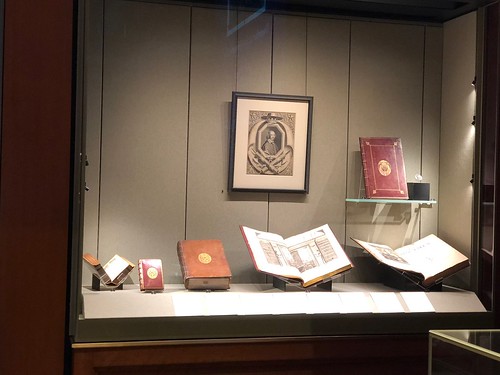 Nanteuil was among the most sought-after portraitists of his age, responsible for surviving images of many of the great and the good who flourished during the reign of Louis XIV.

Nanteuil etched this image of Mazarin after his own portrait of the cardinal drawn from the life. Mazarin, garbed in scarlet silk, is set within his ermine-mantled arms (stars and fasces), his interlaced-JMJ monogram, beneath his cardinal’s hat & tassels and ducal coronet. “Scoles sale 1857 [lot] 302.” Cat. No. 11.4.

De Thou wished his library of some 17,000 volumes to be preserved by his descendants, but the crushing debt of his youngest son, Jacques-Auguste the Younger, forced this public sale after the son’s death, in 1677. The notary’s preface is dated from the de Thou residence in June 1679.

Jean-Jacques Charon, marquis de Ménars, acquired the library en bloc; Cardinal de Rohan-Soubise acquired the printed books in 1706, which then passed to his nephew Charles de Rohan-Soubise; they were ultimately dispersed at a 1789 auction. Colbert acquired the manuscripts from Ménars for the royal library. Our copy is bound in contemporary Dutch vellum. Gift of Samuel Putnam Avery. Cat. No. 5.9.

Jacques-Auguste de Thou’s library included this edition of Justinian’s Code of Canon Law, bound in French fine-grain red goatskin, gilt with his third armorials and monogram. The endleaves are a combination of paper and vellum, emulating Jean Grolier’s practice.

His first bindings when a bachelor concluded with his 1587 marriage to Marie Barbançon de Cany. Following her death, in 1601, he married for the second and final time, in 1602, to Gasparde de La Chastre. In both marriages, he marshaled his altered armorials and monogram with his wife’s. This third and final version ended with his death, in 1617. Gift of Samuel Putnam Avery. Cat. No. 5.10.

The binding, from the period 1602–1617, is of French brown calf, tooled in gilt with the third and final arms block and monogram giag of Jacques-Auguste de Thou and Gasparde de La Chastre. The spine is darkened from exposure.

This royal folio contains exhaustive studies of persons, events, and places in the history of Franche-Comté and Savoy. Occasional references to voyages of discovery of the New World include Ferdinand & Isabella’s sponsoring Columbus, and military expeditions of Emperor Charles V’s forces in Central and South America. Gift of Leonard L. Mackell. Cat. No. 5.10.

The Parisian binding is contemporary with the 15 March 1664 completion of printing and the cardinal’s elevation to the archiepiscopal see on the 24th of that month. The leather is a large single piece of high-quality red goatskin, restrainedly gilt-tooled in a panel design with the Péréfixe de Beaumont armorials on both covers. Gift of Samuel Putnam Avery. Cat. Nos. 5.8, 11.5–6.

The Cabinet of Curiosities described here consisted of ethnographic materials brought back by French scientists from their travels into distant lands only recently explored by Europeans. It survives to this day in the elegant 19th-century building that succeeds the medieval structure of Du Molinet’s era.

The expansive illustrations are the work of Franz Ertinger, a German artist. The vast scope of the library’s holdings three centuries ago are representative of the great importance that the Sainte-Geneviève continues to afford Parisians.  Purchased on the trust fund of Lathrop Colgate Harper. Cat. No. 5.11.

Perrault, best known to posterity for his Tales of Mother Goose, was a prominent scholar who here honors the great men of his era. That many of them were his enemies did not influence his generous descriptions of them.

The two royal folio volumes, bound together in contemporary French speckled calf, contain excellent engraved portraits of the many Illustrious Men. The many artists include the most accomplished engravers of this long era, Robert Nanteuil prominent among them, including an elegant self-portrait, but also such luminaries as Gérard Edelinck and Jacques Lubin. Gift of Edwin D. Holden & F. S. Sabin, 1894. Cat. Nos. 5.12, 11.8–12.

Bronze portrait medallion of de Thou, surrounded by his name, on the obverse.

The reverse carries the dates of his birth and death, and an inscription that this medallion belongs to a series honoring great men of France.  Gift of Samuel Putnam Avery, 1898. Cat. No. 10.5.