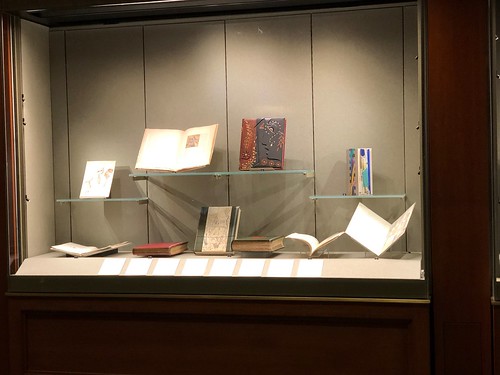 The text volume consists of unsewn folded gatherings, in a printed wrapper, enclosed in a chemise and slipcase. The portfolio contains some 200 illustrations in various states: drawings by Leroux in wood engravings created by some half-dozen French book artists. The Imprimerie Nationale completed printing on 21 February 1912.

Pelletan championed the revival of wood engraving for reproducing illustrations. This was his final publication, the result of seven years of work. Our copy, number 50 of 410 copies, is one of 47 sets printed on chine. Gift of Leon G. Fine, 2017. Cat. No. 8.1.

Each of the twenty-six poems opens with an historiated Chinoiserie initial in colors, reflecting the theme of the text. The work consists of unsewn folded gatherings, in a printed wrapper bearing a large calligraphic Chinese ideogram printed in red.

Founded in 1927, Les Cents Femmes Amies des Livres provided a home to women book-collectors in an all-male world of French bibliophilic societies. Lucie Paul-Margueritte was a prolific author, of best-selling novels and of limited-edition erotica. This is copy number 35 of 130, printed on Japon Impérial, and intended for Mme Henry Rouen. Purchased on the trust fund of Lathrop Colgate Harper. Cat. No. 8.3.

Matisse engraved his illustrations on linoleum for this, his major artist’s book of the Occupation years. Completed three months before the liberation of Paris, it remains a controverted publication. Author and publisher were tried on charges of collaboration, with little lasting unpleasantness. Matisse himself urged his fellow-artists to employ purely French sensitivity, avoiding hints of “cosmopolitanism” (i.e., Jews).

The spectacular, and massive, binding was commissioned by the donor. It is the creation of Santiago Brugalla, who has achieved a raised portrait of Pasiphae in left profile, within Cretan-Minoan designs. Gift of Jill Oriane Tarlau. Cat. No. 8.4.

Bonet had been designing fine bindings for nearly three decades when this volume of testimonials was created by a group of his admirers. This is copy number 10 of the first 50 copies, which contain extra suites of illustrations of Bonet’s many binding designs. (Three hundred copies, all printed on vélin d’Arches, were created in total, and the Club owns one of the later copies as well.)

The red goatskin binding, signed paul bonet on the front turn-in, is designed in his famous signature style of radiating gilt elements, here incorporating the title. Gift of Laura K. and Valerian Lada-Mocarski. Cat. No. 8.5.

Bosco led an idyllic life in his native Province, celebrating its many pleasures in books that reflected none of the trials of the 20th century. This novel about his mas, the traditional farmhouse of the south, was first published in 1945, and reimagined for this luxurious edition.

This is copy number one, for the president of this bibliophile society, Henri-Jacques Donon-Maigret. It consists of the text volume and a suite of illustrations in a portfolio covered with an original drawing of the mas in ink on vellum. The green goatskin binding, its restrained gilding alluding to the rolling hillsides of Provence, a red pollard tree at center, is by the illustrator’s wife, Andrée Poncelet Jacquemin, known professionally as A. Jaclet. Purchased in 2015. Cat. No. 8.6.

Messrs Dorny and Butor were close friends for decades, and together produced about a hundred books of illustrated texts. This is Butor’s commentary on Parisian neighborhoods linked by the Métro, at this stage in this long artistic relationship created in the writer’s own handwriting. It is illustrated in Dorny’s collages, characteristically employing found art, a very long tradition for the artist.

All these cooperative books were deliberately limited to very few copies, and this is copy number two of 15. The binding, by Claude Rieal, was commissioned by the donor. Its witty design alludes to the course of the underground railway beneath stone-built houses. Gift of Jill Oriane Tarlau. Cat. No. 8.8.

Ten sonnets from Queneau’s combinatory verse, Cent mille milliards de poèmes, are here translated by John Crombie, a Londoner long resident in Paris. Kickshaws, the cognate of quelque chose, is a surprisingly authentic if antique English singular noun. The Kickshaws books are all as delightfully imaginative as this one.

Each sonnet is sliced through between the lines, permitting the reader to manipulate the verse in myriad combinations, creating a kind of “found” poetry. The possibilities are nearly endless, since one may work from front to back, back to front, or ad lib within the volume. The binding’s sewing permits this freedom of movement. Purchased on the trust fund of Lathrop Colgate Harper. Cat. No. 8.9.

The three texts were originally published in Paris by Gallimard in 1949. This bibliophile edition was issued unsewn in folded gatherings, in a printed gray wrapper, enclosed in a white-paper chemise and slipcase.